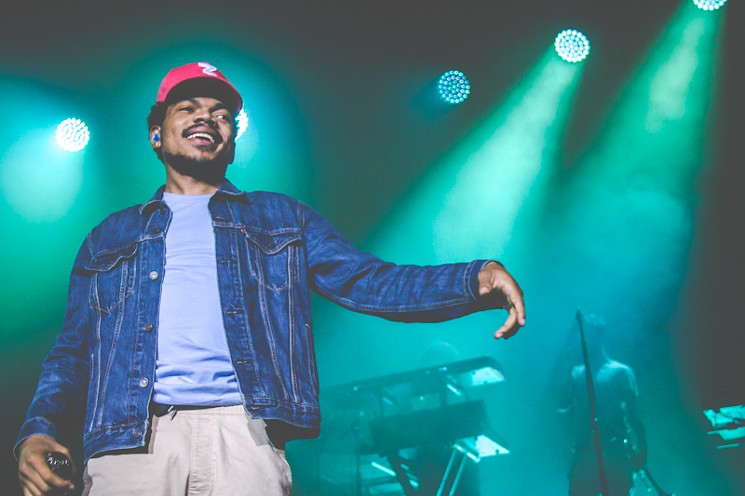 [dropcap]B[/dropcap]ouncing in place, caught in a sea of flailing limbs and blaring music, I found myself beaming. I was sweating profusely in an unfamiliar place surrounded by unfamiliar faces. Even so, I could barely contain my joy. I was in the middle of the crowd at Chance the Rapper’s Magnificent Coloring World Tour, attending my very first concert.

The young rapper from Chicago has enjoyed a recent surge in popularity. His successful 2016 began with his feature on fellow Chicagoan Kanye West’s “Ultralight Beam”, which has been played over 50 million times on Spotify. Chance followed the success of his contribution with a hit album of his own, “Coloring Book”, which debuted at number eight on Billboard’s top 200 list.

“Coloring Book” made history as the first streaming-only album to debut in Billboard’s top ten, boasting 57.3 million streams in the first week it came out as an Apple Music exclusive. MTV described the album “like a block party on the best summer night.” His album, featuring hip-hop legends Kanye West and Lil Wayne, along with trending rappers like Future, Lil Yachty, and Young Thug, universally scored great ratings from critics.

“Coloring Book” is different from mainstream hip hop albums in that Chance mentions his Christian faith in a majority of the songs. Rolling Stone deemed it a “gospel-rap masterpiece”. Coloring Book’s massive summer success set the stage for Chance to go on tour, which he did beginning on Sept. 15.

Chance’s Magnificent “Coloring World Tour” came to Houston on Oct. 15. I arrived 15 minutes before the gates opened, and I was greeted with a line that snaked two thirds of the way around the building. This was a very special night for me; I was so excited to experience this new adventure.

I didn’t have any reason why I hadn’t attended a concert earlier, but when my cousin asked me this past summer if I wanted to go to this concert, I jumped at the chance to go.

I was enthralled with excitement walking through what seemed like an endless line into the building. Elation coursed through my veins when we finally got to enter the Revention Music Center. Chance’s opening act, Francis and the Lights, came out half an hour after the gates opened. Five songs into the opening set, Chance burst through the curtains as Francis started singing Summer Friends, a song off Coloring Book. Chance and Francis danced and the crowd joyously danced in anticipation of Chance’s portion beginning.

It was just a tease as Chance retreated behind the curtains just as his part was to begin. Everyone was still dancing and singing as the latest rap hits played during the intermission, but as time passed everyone grew antsy. The singing turned into chanting for Chance.

Forty-five minutes after he took a break, the curtains revealed Chance’s contagious smile, and he began to dance and sing with childlike glee. We instantly forgave him for the wait and started to dance and sing along with him. Chance’s energy reverberated throughout the suddenly upstart crowd.

The Chicago rapper took us on a self-defined journey through his concert, even playing songs from his pre-Coloring Book mixtapes. His authenticity and booming voice (which sounded true to his recorded music) resonated with me as he went through his set list of music.

Chance seemed genuinely happy to see us in the crowd and fed off our energy. Along the way, Chance preached about God and life in general. As the concert rolled on, the building seemed to get louder with each song, until Chance concluded with final words of wisdom and gospel.

It was one of the best nights of my life. I enjoyed singing and dancing–both of which are not my most talented areas of expertise–for an hour and a half in public. (Even though I am not the least bit talented at either.) I will definitely be attending more concerts–Chance and other artists–that I have the opportunity to attend.

Chance translated the success and uniqueness of his album into an equally compelling show. In what will surely be looked back upon for a great, perhaps even a career year for Chance I am very pleased I decided to witness a small portion of it.