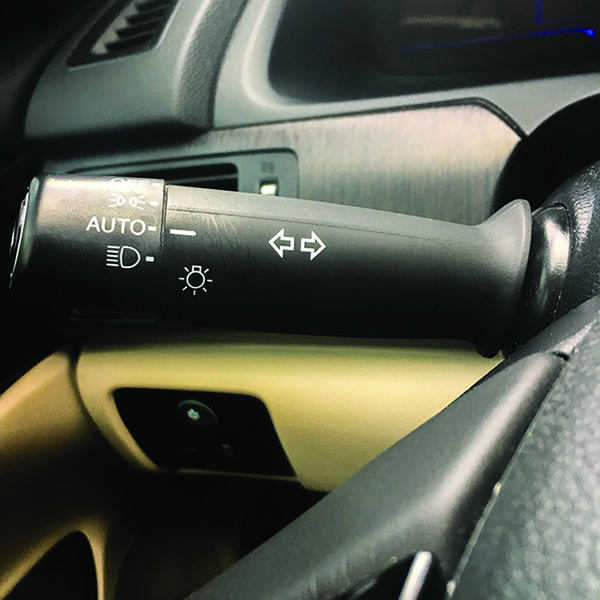 This lever (located to the left of the steering wheel) controls the turn signals on a car. Gently push the lever up to indicate a right turn, or push down to indicate a left turn.

The absence of turn signals endangers everyone on the road

The privilege of driving has introduced me to so many freedoms, but unfortunately, it has also introduced me to so many idiots. I have never seen a more concentrated population of idiots than on the road. The common characteristics of these people include: driving 50 miles per hour above or below the speed limit, trailing dangerously close to the car in front of them so their brake lights keep flashing on and off, and the most common transgression I see, the absence of using turn signals.

It may sound crazy that such a small thing can cause so much distress for me, but it’s also crazy that this small thing can cause so much damage for everyone. According to the Society of Automotive Engineers, drivers don’t use signals while making turns 25% of the time, and they don’t use signals 48% of the time while changing lanes.

It seems like drivers often believe that everyone else can predict their next move, so they decide that blinkers are optional. However, this laziness actually translates to a willful recklessness that endangers everyone else on the road. The failure to use turn signals contribute to nearly 2 million accidents per year. These numbers are uncomfortably high, especially for something that can be so easily prevented.

Unfortunately, I constantly see drivers not using their blinkers at Kinkaid—especially at the intersection of Kinkaid Dr. and San Felipe. There is no left turn only lane to get on San Felipe from the campus, so the people who want to go straight or turn left share the same lane. On multiple occasions, I have seen drivers who want to turn left fail to use their blinkers and confuse the drivers behind them—and the oncoming traffic drivers—and almost every time, this always infuriates one driver.

When I took Drivers Ed two years ago, I learned that good drivers should never be noticed on the road: they don’t attract attention from other drivers because they don’t make stupid decisions. Kinkaid community, the road is a dangerous place where people can’t afford to divert their concentration elsewhere, so please help everyone else out on the road and use those blinkers!