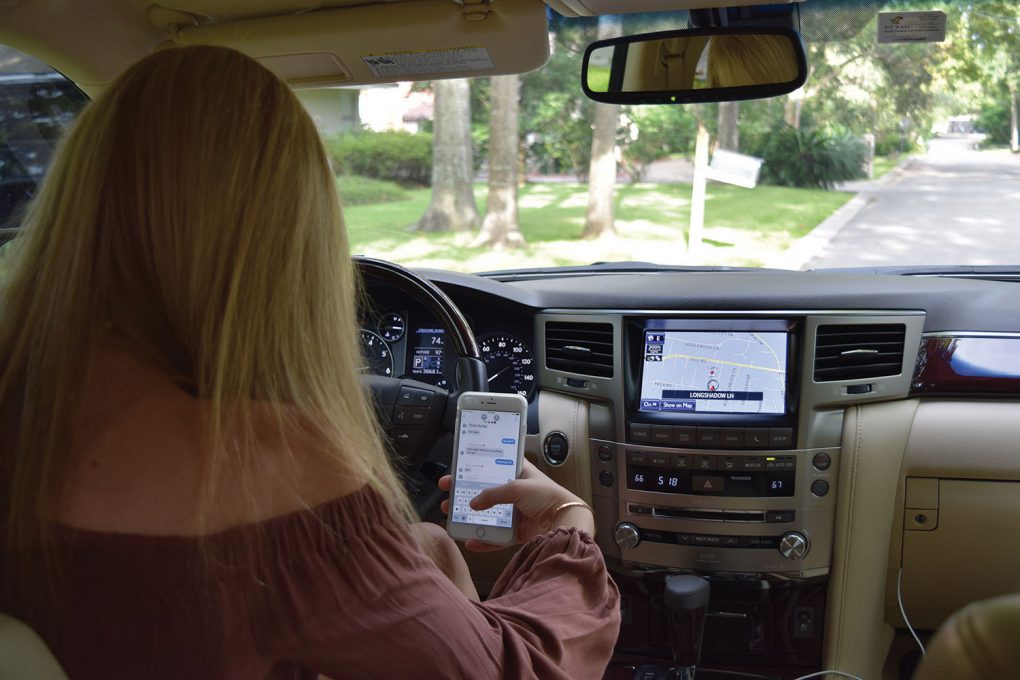 Speeding down a near-deserted West Texas highway, a local Houston family headed home from their summer vacation in Colorado Springs, CO. As the Berrys drew closer to Fort Stockton, Texas, a car emerged in their line of sight. Another family, a man, his wife and his one-year-old daughter, was approaching in the oncoming lane. The man peered over his shoulder into the backseat of his car, searching for a DVD for his daughter and drawing his focus away from the road. He veered into the other lane where the Berrys were driving, crashing head-on into their minivan.

This happened in July 2011. After the long road of physical recovery, the three Berry children founded the One Life Is Enough (OLIE) program, the only student developed and driven distracted driving safety program in the U.S. They were inspired to make a difference because of the car accident that resulted in the tragic death of both of their parents. OLIE focuses on teaching students in schools across the country about safe, non-distracted driving, educating them on the responsibility of handling the independence and power that comes with driving.

400%: that’s how much more likely teen drivers are than adults to get in a car crash while they are texting, according to distracteddriveraccidents.com. Teenage drivers are at a disproportionately high risk of being affected. Although the lives of high school students are busy and overwhelming and sometimes it feels like there’s just not enough time in the day, distracted driving has too big of an impact on so many people’s lives that the text, phone call, or Snapchat can wait.

Sarah Grace Carr (10) grew up across the street from the Berry family and knows how devastating distracted driving can be in someone’s life. She is a new driver, having turned 16 in September, and she said that while she is driving she puts her phone away because she doesn’t want to be “the person that ruins a family’s life.”

“I try to be more aware of my driving and not take my eyes off the road even for a second to look at my phone,” Carr said. “Anything could happen in that one second.”

Ben Padon (12) understands how crucial that one second can be. As he was driving to his girlfriend’s house, he looked down to send her a text saying that he was on his way. That short moment when his gaze shifted from the road to his phone was plenty of time for him to close in on the car in front of him.

Even that short four word text, “I’m on my way,” was enough for him to come dangerously near to the car in front of him. It was a close call, and he said that if he had been going any faster, he would have collided with the car ahead of him. The unnerving speed underscored for Padon how instantly a quick text could result in a catastrophic crash.

The children of Joshua and Robin Berry are all too familiar with the effect that distracted driving can have on people’s lives. Not only did they lose their parents, but the crash also paralyzed brothers Peter and Aaron from the waist down. The driver of the other vehicle also sustained serious injuries, and his wife died in the collision. People throughout the Houston community were shocked and disheartened by the senseless—and careless—loss of life.

Carr recalls vividly when she found out what had happened to her neighbors. She returned home from camp and saw that her mom’s arm was broken and in a cast. “I asked [her] what happened and she told me the police had come to our house to tell her about the accident,” Carr said. “She passed out and fell on her arm from the shock of it.”

The Berry children remain in Houston and live with their aunt and uncle, Simone and Matt Berry, and their two cousins, Noah and Misha. They hope to lower the number of victims claimed by distracted driving by educating students about the danger and stressing its negative consequences.

The CDC’s injury prevention and control research found that over 8 people are killed in distracted driving accidents each day. The number one source of driver distractions is talking or texting on cell phones. Armed with firsthand awareness of the huge role that distracted driving plays in car crashes, the Berrys have encouraged students to sign their OLIE pledge which states that drivers will not drive distracted in any way including, being on your phone, eating, playing games, reading; as well as working to provide them with the skills necessary to be safer drivers.

Along with their hope to grow and establish their OLIE program, they are also currently working to help pass House Bill 80, which will make it illegal to use a cell phone while driving in the state of Texas. The Berry children have been there throughout the process supporting the bill being passed by the House of Representatives by testifying before members of the Senate Transportation Committee, and they continue to encourage senators to vote for it to be approved and soon become a law. They are adamant that they will do their part to help others and thus, save lives by getting HB 80 passed. Texas is one of six states that has yet to put a legal ban on texting while driving, and the Berry family is determined to change this situation.