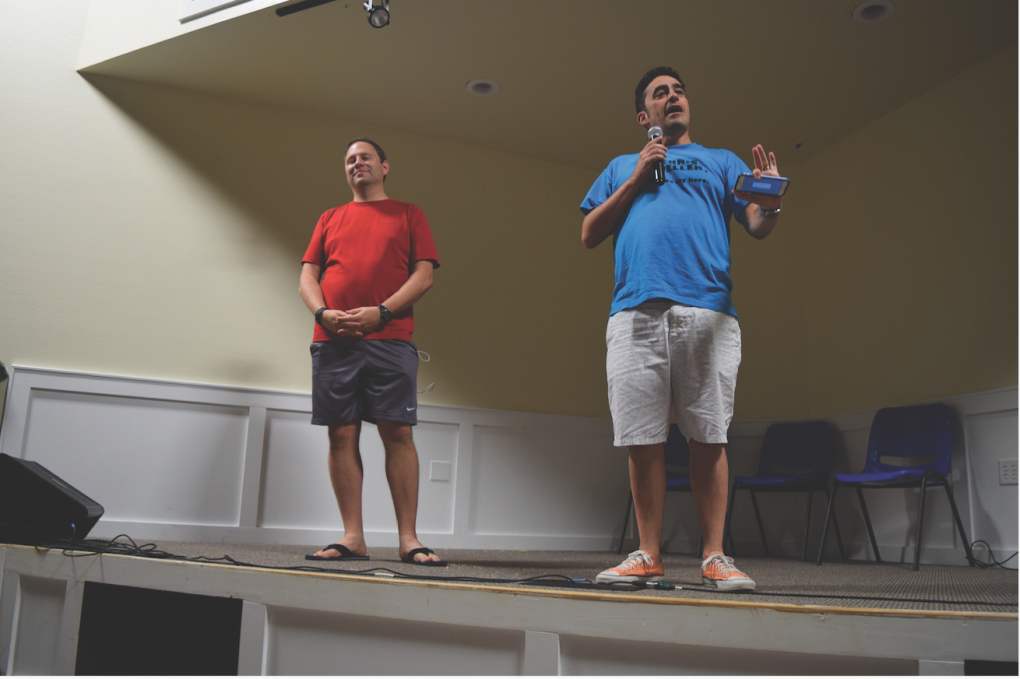 [dropcap]A[/dropcap]fter U.S. President Franklin D. Roosevelt created impactful reforms that dramatically changed the structure of the United States government–taking them out of the Depression in the following eight years and making huge waves in the first part of his presidency–the term “the first hundred days” became known as any leader’s first important milestone: a time in which progress is measured and changes are scrutinized. And as Head of Upper School Mr. Peter Behr took office only six weeks ago, it seemed appropriate to examine his first milestone–his “first thirty days”–in the same “presidential” spirit.

How has the move between cities been in general?

“It was actually pretty smooth. Considering the distance, the numbers of players involved, the having to buy a house, sell a house, it was very smooth. You would expect more bumps in the road, and we actually didn’t have them, so it was pretty good.”

What was the hardest thing to leave behind?

“Probably all the connections you make with everyone you work with. The knowledge you have with that school and how it works. [Knowing] how to solve problems more quickly.”

Was there anything that you liked getting away from in Louisville?

“I liked Louisville, Louisville’s nice. It wasn’t running away from, it was going to.”

What was the first thing that excited you upon your move?

“I get so excited so easily. I think the newness excites me: it’s not the thing, it’s the what. It’s not a one thing, it’s a lot of things. I had been at the previous school for 15 years total, so going somewhere different and learning something new—I’ve always appreciated that in my career.”

How was your first Kinkaid/Texas high school football game?

“It was good. I went to the first game. It wasn’t anything I wasn’t expecting. They have big football games [in Louisville], but I know it’s a big deal in Texas. It’s a different atmosphere because it’s a different school; we didn’t have football [at the Louisville Collegiate School]. The pomp and circumstance around it is probably bigger; the game itself is kinda the same.”

What were your thoughts the first day you walked into the Upper School as principal?

“Where is everyone? Because the first day really was in July. On the first day of school, I was really excited to get started. Because I had been here in July and having that actually begin, it was an exciting thing to have happen. It was looking forward to the first assembly and of course wondering ‘Hm, I wonder if they’re gonna be freaked out by what I’m gonna say or what I’m gonna do, or if I’m going to be so different they won’t know how to take me. But that’s okay; they’ll figure it out eventually.’”

What is your favorite part of the job?

“[My] favorite part is investigating what’s going on. And I don’t mean individual situations with kids, but how the school runs. At the same time, knowing there’s always more things to find. So I call them my black boxes. That’s the part of being new anywhere. You guys are going to experience it if you came here new, you’re gonna experience it when you go to college new, there’s new stuff the first year you do it. And once you’ve done it, you’re like oh yeah, I know what to expect.”

What were your impressions after exploring the campus more than your previous visit earlier in the year?

“I’m amazed how much you can walk inside in the air conditioning. In terms of the spaces, the new space that’s been opened is amazing.”

“I am approachable, I do listen, and I am interested in what you’re saying. I’m not always going to agree, but I will hear you. And I’m available to talk about it. If there’s something that you are interested in talking about, I’ll try to give you the reasons and logic behind it. If there’s not logic behind it, I’m going to have trouble with it, too. And that’s where your Friday theme dress days have changed. If I can’t explain it to you in a logical way, then I have trouble with it as well. I’m not here to overhaul—this is a great school. I’m not here to blow up traditions or anything like that. I’m here to tweak here and there to help with balance, to help with the logic behind things and to make it consistent and clear for everyone.”

What have you learned about the Kinkaid community since the first day of school?

“[Parents] are invested in their kids. Independent school parents care about you guys and the education you’re receiving. It seems like a very well-knit group that’s very involved and wants to be involved because they care a lot about the school. I think the students are willing to really have a good time. I think you guys are very busy and like to make yourselves busy, and sometimes you don’t like to say no, even though you know it’s not in your best interests to say yes all the time in terms of doing this and that. But that’s normal. We offer it and you wanna do it because you’re excited about it. And that’s a good thing. I’m not saying it’s a good thing to be overstrung by too many things, but to want to be a part of the community, that’s awesome. I think your pride in being at Kinkaid is something you can feel and sense.”

What are your short-term goals for the year?

“Short term is figuring out how the school runs. Then when things come up and you understand the school, you start working on problems a different way because you understand how one problem over there and another problem over here can actually be solved together with something else. And I don’t have all that together yet, but that’s my goal: To begin learning all parts of the school. But even smaller changes, the schedule, the dress code, looking at grades online. But more short-term because they are things that could happen next year. I’m not saying it’s going to happen in January, but things that would happen throughout the year and be ready for next year.”

What are long-term goals you have for the school?

“Digging into the balance question. What we are doing in terms of how we are scheduling things with athletics and arts and academics and how they’re causing conflicts and how we’re working on those conflicts. Looking at our student programming and use of time in the school day. What are some new strategies for teachers to use for teaching? How to work on a cohesive strategy for professional development? I’m not saying what we’re doing is at all, at all, flawed, but how can we make it better?”

How are you going to make sure all three A’s are equal or accessible to all students?

“I like your term accessible. Or we could say same level of prominence maybe. I think that’s part of the big question of balance. And I don’t know if I have that answer for you yet. I think every school struggles with this. But Kinkaid has so many wonderful opportunities that people want to be involved with that I think that struggle is greater. Figuring that out is part of looking at scheduling. Just a small tweak of maybe being able to sleep in everyday (except for maybe your zero period science class). But that small tweak of consistency actually reduces the panic of ‘what day is it tomorrow?’ So you know what to expect—knowing what to expect lowers the stress. Those small things can make a bigger difference than you think.”

Any changes coming to the Dress Code?

Mr. Ramey is working with the subcommittees of the Governing Council to talk about possible changes. I don’t have a plan for what it should be except to say I want it to be clear and consistent so it’s easier to follow. Whatever we come up with would have to be easier to understand. Clarity does cause restrictions sometimes and I understand that. Not everyone’s going to like everything that we come up with—it’s inevitable. But the spirit behind it is collaborative: we’re going to listen and then hopefully make whatever we develop clear and consistent.

Favorite food in the dining center?

I like the house-made chips. They’re probably one of my highlights of things I’ve had there. Not to say that the fajitas are not divine, right? Every time I see the chips, I say, ‘Gotta get the sandwich again today.’

I don’t know if I have a favorite yet. I have ones I’m inclined to go to now, but I don’t know enough. Right now, it’s George’s Pastaria.

Thoughts on Upper School involvement in the Learning Center?

“I think they need to explore it this year for the Middle School, see how it works for them, what they’re using, what they’re not using, and I’m not saying we’ll get the leftovers of what they don’t use, but at least they’ll be able to know when they need it, and so we can then give better guidelines to you of when we might be able to use it. I do think that’s an amazing space and it would be amazing for us to get in there.

Do you feel like Kinkaid students have a lot of homework?

That’s a hard conclusion to make in four weeks. Some students have a lot of work. Majority have a lot of homework, I’m willing to go there, look at what I hear, and compare it to what teachers say they do. Is it a lot of homework because students are doing a lot of other things? It’s a really complex issue and one that’s going to take longer to figure out.”