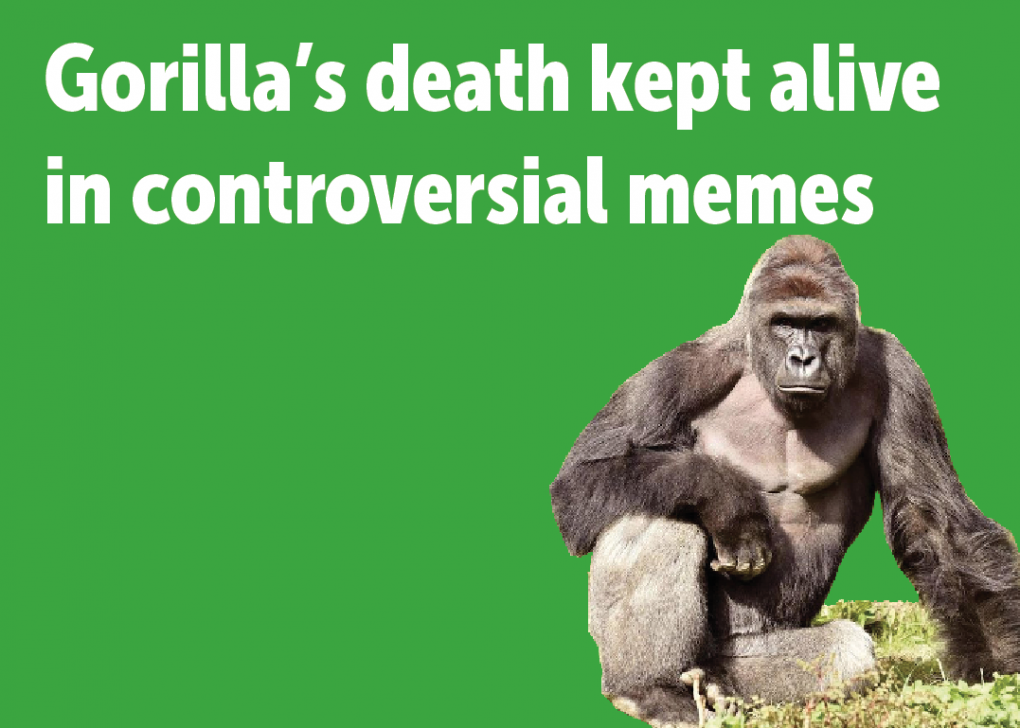 On May 28, 2016, a three-year-old boy at the Cincinnati Zoo climbed into the gorilla enclosure when his mother was distracted. The child was picked up and dragged by Harambe, the western lowland gorilla who lived there.

Zookeepers converged on the area, concerned about the boy’s safety, and shot and killed the gorilla. Videos captured by witnesses and posted to social media quickly turned the incident into a national news story.

Four months later, the gorilla’s death is still showing up in news articles, social media, and our everyday lives. The incident has “meme-ified” the gorilla’s name. Memes, broadly defined by Webster’s dictionary as “an idea, behavior, style, or usage that spreads from one person to another in a culture”, have become a popular form of communication, especially about pop culture topics. Harambe memes have become ubiquitous, spreading across social media platforms such as Twitter and Instagram.

People outraged by Harambe’s death have harassed the Cincinnati Zoo on Twitter. For example, the Cincinnati Zoo tweeted, “Receive half-price admission today & Sunday for Visitor Appreciation Days!” and an internet troll responded with, “@CincinnatiZoo harambe loved half price admissions.” Under a barrage of such tweets, the zoo ultimately decided to delete their account.

Internet memes and Twitter harassment are not the only ways Harambe is still very much in the spotlight. Change.org, a website where users can start petitions and others can sign online, has spawned petitions relating to Harambe, including a petition for renaming the Cincinnati Bengals to the Cincinnati Harambes; it has already garnered 24,287 signatures, just 713 short of its 25,000 goal. Meanwhile, the Justice for Harambe petition has accrued 515,395 online signatures.

The Harambe controversy has made its way to Kinkaid as well. An example of this occurred When Gleith Cozby (10), a member of the Community Service Council, posted a Harambe meme on the council’s Instagram account promoting the bocce ball tournament at Kinkaid. The meme said, “Take a shot at bocce for Harambe, like he took one for you.” School administrators requested the post be removed.

Dean of Students, Mr. Josh Ramey, first noticed Harambe references appearing on campus when seniors referenced Harambe on their cars at the senior One Last Blast event in which seniors came together and wrote on each other’s car windows. After further investigation, Mr. Ramey learned that the Harambe meme is increasingly linked to derogatory and racist stereotypes, and the seniors were notified to remove any references from their cars; all Harambe references and memes have since been banned rather than just removed in specific situations, so as to avoid any controversies down the line.

“The problem is when someone makes a racist meme out of [Harambe],” Mr. Ramey said. “They ruin it for everybody because even if your intention is not to be racist, it could be perceived that way by others.”