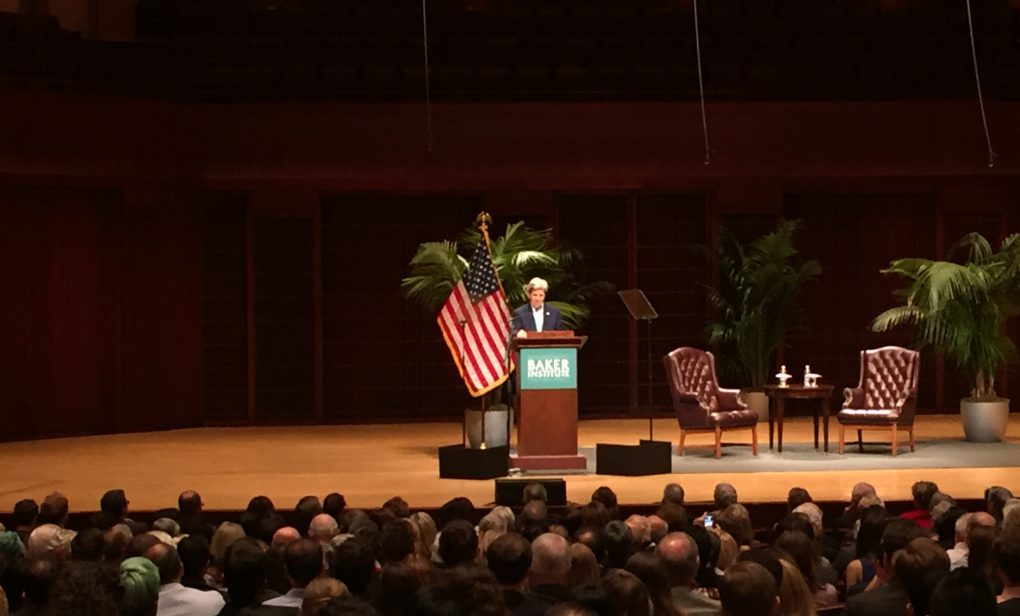 [dropcap]O[/dropcap]n April 26 in the Stude Concert Hall at Rice University, U.S. Secretary of State John Kerry discussed the role of religion in foreign policy to an audience of about 700 selected guests and Rice students.

Kerry, a Roman Catholic, began the event sponsored by the Baker Institute for Public Policy with a disclaimer that “the State Department is a secular institution and that, from its founding, the United States has maintained a formal separation, obviously, between church and state, and nothing that we’re doing seeks to, or does cross any of those lines.”

“This means that in our foreign policy, we don’t advocate on behalf of any particular set of religious beliefs or express a preference for one faith over another – or even for religious belief over non-belief. But this doesn’t mean that religion is irrelevant to our approach to world affairs, and particularly in this globalized, different world we are living in today,” Kerry said.

“My basic argument is straightforward,” he continued. “The more we understand religion, the better we are able to engage religion, the more effective our diplomacy will be in advancing the interests and values of our people . … We don’t make contacts for the sake of having interesting conversations, we do so to make progress on our foreign policy and security goals, to make America safer.”

Although he did not signal any shift in U.S. foreign policy, Kerry stated that the State Department must continue to extend communication beyond religious leaders to the religious rank and file (ordinary members).

A Yale graduate, Kerry said that if he had a chance to go back to college, the subject he would like to study would be comparative religion.

“Consider that four out of five people on Earth align themselves with one religious tradition or another, and that over the centuries, religious teachings, movements, and conflicts have done as much as any secular ideology or economic force to determine the political context and geographical boundaries that define the international arena.” Kerry elaborated on this, saying that religion can have either a positive or a destabilizing influence on world affairs.

Kerry described previous efforts by the State Department to connect with religious groups as “having meetings almost exclusively with men – and usually very old men,” but the U.S. is now “in touch with a much more diverse group of figures.”

When he was selected as Secretary of State in 2013, Kerry stated that he had “advisors on political, military, economic, developmental issues, but none on the key topic of religion.”

In his first months in office in 2013, Kerry created the Office of Religion and Global Affairs to “advise me [Kerry] on how religion impacts U.S. foreign policy priorities, to support the entire State Department in better understanding religion and engaging religious communities, and to establish wider and deeper ties with key stakeholders across the globe.”

Last year, the office held a workshop for Christian and Muslim leaders in Nigeria to discuss fighting corruption in the country. It is also working with religious leaders on issues of economic development, refugee relief in Europe, ending female genital mutilation in Gambia and standing up for minority rights. The U.S. State Department has also sent an envoy, Arsalan Suleman, to the Organization of Islamic Cooperation.

U.S. embassies around the world have been encouraged to reach out to religious groups in an effort to acquire a better understanding of the religions present in the area.

Such contacts have proved useful in providing information on actions by the Islamic State of Iraq and Syria (ISIS/ISIL/Daesh). In 2014, the Islamic State began seizing territory in both Iraq and Syria while raping and enslaving the Yazidis present in the area. Because of previous communications, Yazidis and their intermediaries were able to contact the State Department to give accurate locations for supply drops and airstrikes.

Kerry said the protection of religious and ethnic minorities is a “fundamental test, not just of our leadership, but of civilization itself,” and stated that he had determined the Islamic State is committing genocide against minority groups (Yazidis, Shiite Muslims, Christians) under their control.

He also spoke out against the rising anti-Jewish sentiments in Europe, saying that there has been a “significant increase in hate crimes – many of them violent – and also frequent incidents of intimidation and examples of anti-Semitic graffiti and verbal abuse.” Kerry warned that once started, prejudice can be very hard to contain.

Kerry also stated that religion does not necessarily play a role in the radicalization of Muslims, citing political repression and denial of rights as relevant factors, along with the lure of “regular meals [and] companionship.”

“You don’t even have to be religious,” he added, using an example of two young British men who went to join the Islamic State in Syria in 2014 and took with them the books Islam for Dummies and The Koran for Dummies.

“Daesh recruiting videos include a religious narrative but also point to an idyllic picture of Daesh families having picnics and going to amusement parks,” he continued. “The reality is that we still don’t have a fully satisfactory answer as to why some people – married, educated, older – fall under the lethal spell of terrorism, but we’ve got some pretty good clues.”

“Multiple studies show a correlation between political repression and the rise of violent extremist organizations,” he said. “Denial of fundamental freedoms, including religious freedom, deprives people of voice and dignity,” Kerry continued. “It tends to force legitimate religious and political activities underground, and it fills many with an anger that makes them far more susceptible to terrorist recruiters.”

“The lure of extremism can be hard to resist, my friends, if you are a child with nothing in your stomach, and somebody offers you regular meals, companionship, and an upside down world view in which you have a place on center stage,” said Kerry.

Kerry called for the creation of “hundreds of millions of new jobs each year” to provide a better alternative for the young people without opportunities to work or find education. He also called for greater opportunities for women in the workplace.

Without mentioning Donald Trump or Ted Cruz by name, Kerry criticized the efforts to “smear” American Muslim communities with the actions of extremists. Kerry argued that blaming all Muslims for the actions of some is “no more logical than it would have been in the 1990s to hold all Christians accountable for the atrocities committed against Muslim populations in Bosnia and Kosovo.”

“Muslims have lived with us from the founding of our country,” he said. “They have fought on our side in every war, made homes in every region – proudly in Houston – and pursued a wide range of occupations. In other words, they’re Americans (applause).”

Kerry also reiterated his belief in the necessity for action to counter climate change and warned that Galveston, Padre, and Matagorda Islands as well as parts of Houston could be inundated before the end of the century.

“Religious communities – including America’s indigenous populations – have long been aware of this intimate connection between environmental stewardship and harmony with God,” said Kerry. “You have to be following the ostrich philosophy to not [take action], which is put your head in the sand and pretend nothing’s happening.”

Kerry also recognized the parents of freelance journalist Austin Tice, who is believed to be a captive in the middle east. “We are inspired by your courage and by your love for your son,” he told them. “And I personally continue to do absolutely everything I can to see that Austin returns home safely and soon.”

Kerry had met with President George H.W. Bush (41st President) and Secretary James A. Baker III (67th Secretary of the Treasury and the 61st Secretary of State) earlier in the day. His trip to Texas also included a stop in Austin, where he took part in a clean energy event and a summit focusing on the Vietnam War, of which he is a veteran.