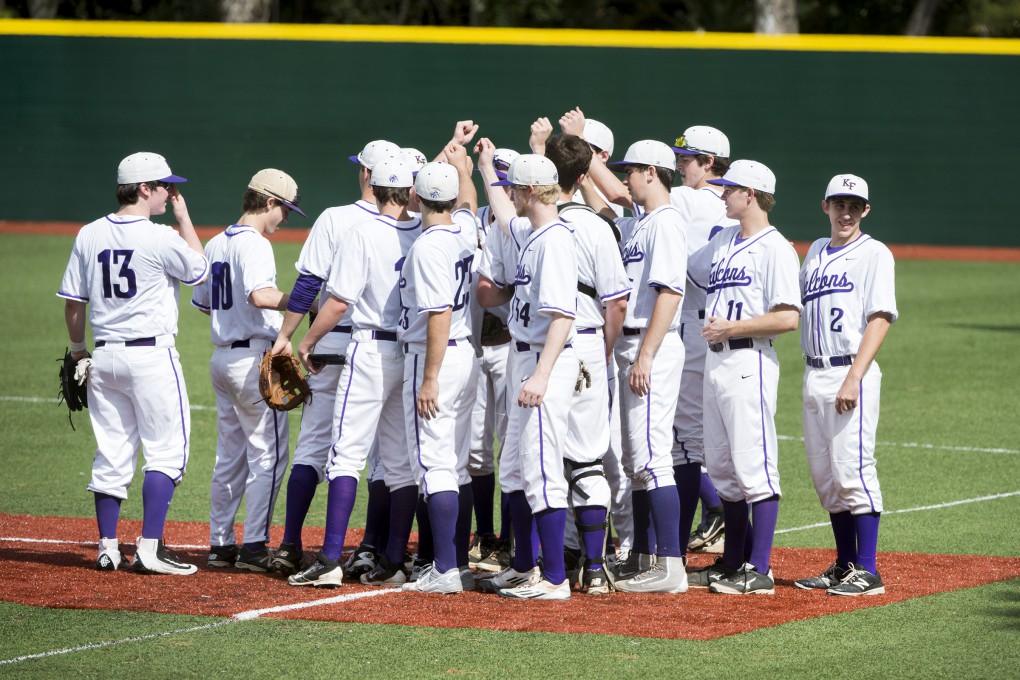 Baseball team comes in for a huddle before the game against Bishop Lynch.

[dropcap]T[/dropcap]he team dresses out in their uniforms, bodies already pumping with adrenaline. Going through the motions, the boys form lines to work on their warm up drills; it’s muscle memory at the point. Superstitiously, they avoid treading on the foul line so that they won’t have bad luck during their game.

They’ve been waiting for this game for a long time.

The team gathers into a huddle for a team prayer right before the game begins. They jog to their places on the field to start the game they will remember the rest of their lives: SPC championships.

Falcon baseball has historically been a fantastic team with a rigorous program; they finished first place in SPC in 2015, and their current SPC record is 2 wins and 0 losses. The question on everybody’s mind: how is the baseball team consistently so strong?

Their success can be explained in a formula. The first part of the formula is the experience; all of the boys on the team have played baseball for the majority of their lives with some starting as long as 15 years ago for little league teams such as Post Oak, YMCA, West U, and more, the team is filled with players who know the game better than the back of their hand. They have  pitchers who have perfected challenging curve balls, outfielders who can throw the ball before the opposing team reaches the base, and batters who can whack the ball outside the back fence of the stadium.

Because these players have played for so long, they’ve developed a passion for the sport. In fact, almost all of the players consider baseball as their main sport. These players don’t mind spending extra time to perfect their swing after practice, competing in club teams outside of school, and attending multiple Astros games during the season. “I fell in love with the game. Once you get good at it and committed to it, it’s hard to stop playing,” Sax Morgan (11) said.

Baseball is very popular in Houston, which helps Kinkaid’s coaches because they have a bigger pool of players to choose from. The freshman and varsity teams are filled with boys who all have played since their tee-ball days and want to work hard to eventually make their way up to varsity.

Lastly, and most importantly, the reason why the Kinkaid boys varsity baseball team is so successful is because of their camaraderie. The players spend time with each other outside of practice, forming strong relationships. This togetherness is a key to their success because not only does it build teamwork, but it also gives them the energy necessary for them to work harder.

The stamina they bring to the field is unparalleled. The strength from one player radiates to the rest of the players and solidifies the performance of their game. “We have a lot of team chemistry; we’re really upbeat; we have a lot of energy. Even if we don’t have the best players, we mesh together better than any other team, and that sets us apart from our opponents,” Ford Young (11) said.

The team’s companionship also drives them to accomplish one unified goal. They go out on the field with a common goal and leave the field having achieved it. This keeps the team in tune and maintains their strong cooperative work ethic. If the team wins a game, they celebrate together, if they lose a game, they work together to correct their mistakes and build each other up, which is very valuable on a sports team.

The team looks forward to another successful season with the goal of winning the title of SPC champions. The boys know that their experience and passion will drive them to work harder in practice, but their team fraternity is the aspect of this team that truly sets them apart from all of their opponents.

To see this talented baseball team play against St. John’s, everyone is invited to attend the highly anticipated rivalry game at Minute Maid Park on April 21 at 6:10 p.m.