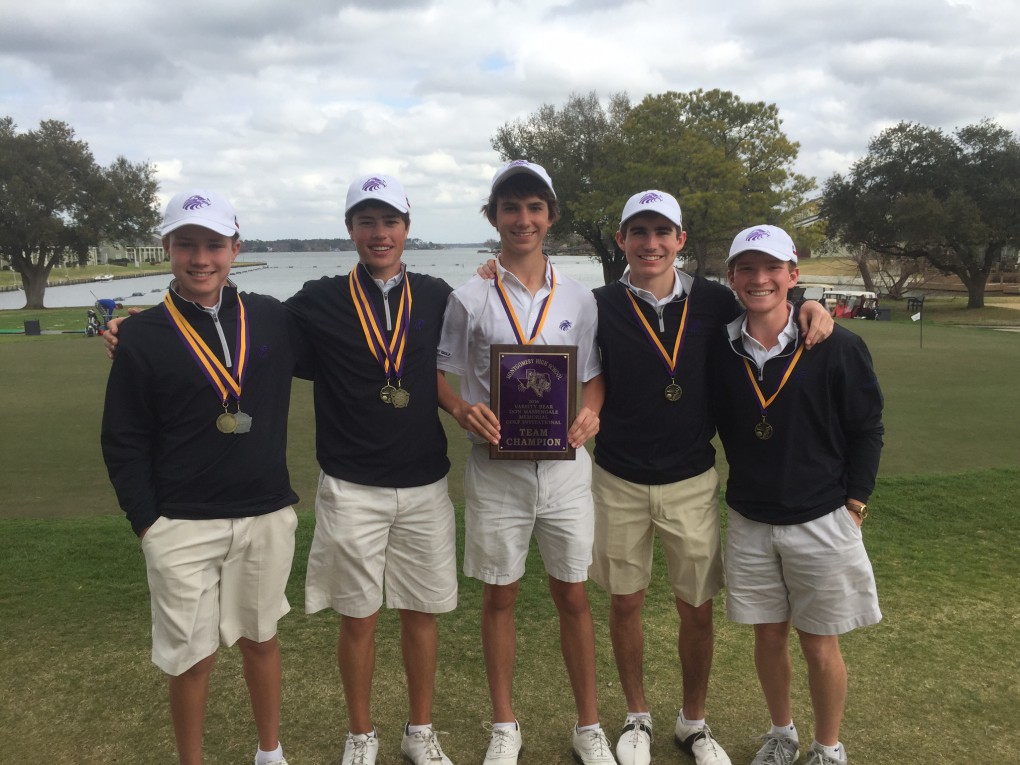 Pictured above: Mason Nome (9), Cole Hammer (10), Will Jacobe (9), George Clark (12), and Jake Lipman (12) hold the plaque they earned after winning their first tournament of the season at April Sounds Country Club in Conroe.

Golf. Golf phenoms Cole Hammer (10) and Mason Nome (9) placed 1st Medalist and 2nd Medalist respectively in the Montgomery High School Tournament in Conroe last weekend. The team also took the Team Champion plaque from the tournament after shooting 307 and 305 for 612 total winning by 27 shots over Klein Oak and The Woodlands. On Monday, the boys played at Black Horse Golf Club in rainy conditions and nearly set the school record with a score of 283 (five under par). “With motivation from our captain, Jake Lipman, I’m confident that Kinkaid can pull together yet another undefeated season,” said Omar Rehmatulla (12). The boys team looks to avenge their second place finish in the SPC Tournament last year. On the girls side, Emily Talbert (11), shot a 96 in the Kinkaid Tournament on Monday placing her at an 11th place finish. Also, Lillian Rosenfield (10) shot 102 and finished in 16th place. Though this was not their best finish, the girls look to put in work to ensure improvement over the course of the season. “We are working hard every week in practices. We have five new freshman this year who are enjoying the season and had fun at their first tournament,” captain Lauren Herring (12) said.

Tennis. The boy’s tennis team will be striving for a SPC championship this season. The boy’s team is looking better than ever going into this season with new head coach, Ross Shaw from Westheimer Indoor. “Coach Shaw brings a lot of knowledge and experience to the program which will help us all grow as players,” said Michael Smith (11). On the girl’s team, after a 6th place finish last year, the team is prepared to step up to the challenge. “I see a lot of improvement. We didn’t lose anyone from the team last year and have gained five great freshman. Everyone has been working really hard to make this season a successful one,” said Mary Labanowski (12). With five seniors on this year’s team, they have all the experience and talent needed for a strong season and a deep SPC tournament run. Both teams have a match on Tuesday versus the Emery Weiner School.

Baseball. As the reigning and SPC champions, the boy’s baseball team knows that they have a target on their back and are willing to do whatever it takes to keep the SPC crown here at Kinkaid. The team will have to go through their talented city rivals, Episcopal High School and St. John’s School, on their road to SPC, “St. Johns has a lefty pitcher that throws low 90’s that will likely throw against us, and Episcopal has a lot of individual talent all around the field,” said Michael Goldak (12). The team takes on Foster High School in the Woodlands High School Tournament tonight at 6 p.m.

Lacrosse. Heading into the season, the boy’s lacrosse team is ranked as the 4th best in the state of Texas. The team is looking to defend their spot and reputation for the 2016 season and look to get another top 4 finish in SPC play. With the return of Rhett Cardwell (12), the team has another offensive asset at their disposal, adding to their already high scoring offense. The girl’s lacrosse team is off to a fast start this season, winning their first game against Ursuline Academy of Dallas by ten goals. The majority of the team is upperclassmen, giving the team a huge advantage over their competition. High expectations for themselves should lead the girls to a successful season. The boys play Cypress Fairbanks High School on Wednesday, March 2, and the girls have a home game against Cypress Fairbanks Lacrosse Club on March 1.

Track. Track and field is one of the most improved sports at Kinkaid with tons of great athletes on the team this year. Many athletes from other sports have come to track and field to improve their fitness and help the team win more events.  “As a team, I think our goals primarily involve placing in the top 3 at SPC, and after the first two weeks of track, I definitely believe that is achievable,” said Taylor J. Cowan (12).  The team has their first meet tomorrow at 9 a.m. at the Strake Jesuit Crusader Relays.

Softball. Going into this spring season, the softball team is hunting to for a SPC win. The team has started off the season with a 2-2 record, including a solid 7-1 victory over Westside High School. This weekend, the team has three games in the Ft. Bend Christian School Tournament. With this year’s team comes more than five freshmen, and the team is hoping that their new additions can learn quickly and be prepared for the long season ahead. Head Coach Beth Rodriguez is ready to lead this group to another successful season, and hopefully a SPC championship trophy is in their sights.