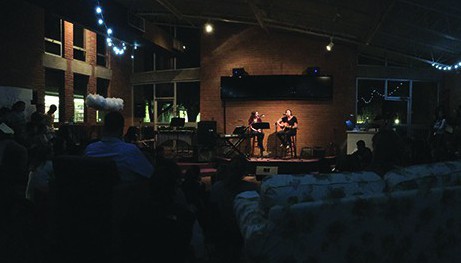 [dropcap] K[/dropcap]inkaid hosted its first-ever Coffee House on Friday, Jan. 29, and people are still talking about it. The Student Center was filled to maximum capacity with students sitting on the floor, piled onto couches, and leaning against the walls. At several points throughout the three-hour event, the Student Center was standing room only. A strand of light bulbs were strung across the room and twinkled overhead, while students and faculty breathed in the smell of hot chocolate and coffee. Artwork hung on the walls and stood alone where people could gather and admire the work. Paintings, prints, sculptures, and photographs depicting complex, humorous, and beautiful messages were all on display.

There were performances of all kinds, including slam poetry, reading of short stories, and live music of both popular and original songs. Students—and a few teachers—performed until 10 p.m., and the energy and excitement radiating from the audience was palpable. Throughout the night, the room stayed crowded and the free mugs offered to the first 100 people to arrive went so fast that anyone arriving even 20 minutes late didn’t get one.

Modeled after the popular Coffee House event at the ISAS (Independent Schools Association of the Southwest) arts festival, this event was organized by the Fine Arts Leadership Board.

“I made a logo that was similar to the poster so everything would match,” Halle Brazda (12) explained. She helped create the flyer for the event and the board decided it would be fun to give away mugs with the same print as the flyers.

Brock Looser (11) and Evan Rosen (11) were in charge of announcing each performer and helped organize the lineup. Looser communicated with each performer to help set the order and make time for everyone, but the whole board did a lot to help prepare for the night. “Everyone on the Fine Arts Leadership Board had a different task for organizing the night weather it was the art, the food and coffee, the sound, the setup of the student center, or sign-ups and advertising,” Looser said.

Like the ISAS event, participants sang both original songs and crowd-favorites. Q Tabarestani (12) played an impressive guitar solo but also provided a backing accompaniment to Zach Roubein (12) in his reading of an original piece titled, “Second Chances”, in a rhythmic, bold, and thought-provoking performance.

“I decided to read it because I’ve always wanted to perform slam poetry in front of an audience, and the chance to do it during senior year with one of my best friends was too great to pass up,” Roubein said.

Tabarestani wanted to combine a spanish, jazz, and rock and roll sound, so while the solo was mostly a compilation of pieces, the transitions were his own work. He spent about an hour every day practicing in preparation for his performance. “I started practicing over the summer and wanted to show people that I played guitar,” Tabarestani said.

Austin Karkowsky (11) has “always loved performing and music.” He belted out “Drops of Jupiter” by Train while playing along on the piano. Karkowsky has previously attended the ISAS Coffee House, and he was thrilled that Kinkaid held this event. The big difference, Karkowsky said, is that at ISAS “you are performing in front of all high school kids and while you know some, you are mostly performing in front of strangers. At Kinkaid Coffee House, it’s a lot of your friends, your teachers, it’s everyone you know. You definitely get more nervous in front of your peers.” Anna Glickman (11), who has also performed at ISAS, commented that “everyone there is just as supportive and enthusiastic as the Kinkaid audience, so it’s really fun.”

Glickman who preformed with Eloise Detmering (11) also sang a piece she wrote herself. She was nervous to perform but her pre performance ritual help keep her calm. I say the lyrics really fast before I go on just to make sure I haven’t forgotten them,” Glickman explained.

Martha House (12) showed up at the Coffee House because her friends had helped with the set up, but she ended up staying because she really enjoyed every performance. “I was really looking forward to hearing Mia Munn sing. She has the voice of an angel!” said House, who also expressed hopes that the Coffee House “is a great new tradition that I hope carries on for years to come.”

Not all performances were musical. Kylie Lohrenz (12) and Grace Wimbish (11) read excerpts from original fiction. Wimbish and Carter Green (12) co-wrote a fantasy piece about a demon hunter and her sidekick. Lohrenz’s excerpt from her short story, “Here’s Hoping” had the entire room laughing at the strange adventure of her main character, a 40-year-old woman named Jennifer.
“Coffee House was a really warm environment, and everybody was so supportive and that really helped me,” Lohrenz said. She echoed the feelings of many of the attending students and faculty members, all of whom remarked on the incredibly positive and encouraging atmosphere.