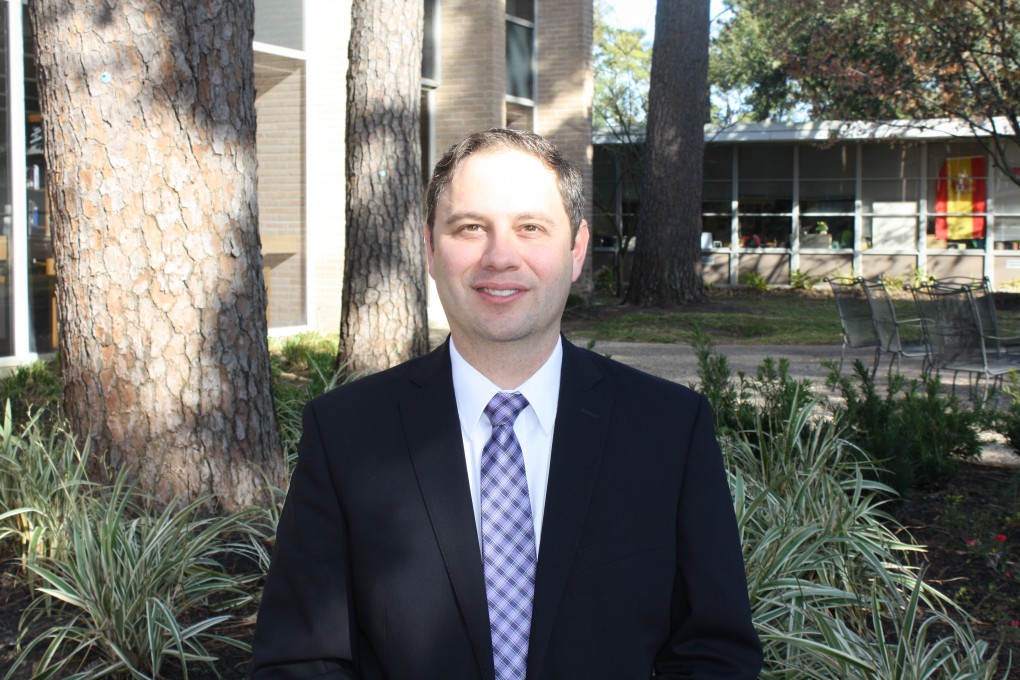 [dropcap]B[/dropcap]ack in September 2015, Mr. Patrick Loach announced his decision to leave Kinkaid after four years as the Head of Upper School. On Thursday, Jan. 21, 2016, the school administration formally announced that Mr. Peter Behr would be the new Head of Upper School, starting in the 2016-2017 school year.

Mr. Behr will join the Kinkaid community from the Louisville Collegiate School in Louisville, Kentucky, where he filled various roles. Mr. Behr was a classroom teacher in the sciences and served as Science Department Chair. He was also a Dean of Academics, a track and field coach, a debate coach, worked in Admissions, and most recently the Head of Upper School. Additionally, Mr. Behr has experience at more than one independent school. It seems as though he is a sort of scholastic Renaissance man. As Assistant Headmaster Dr. Ed Trusty put it, Mr. Behr was the “full package, where all those pieces [came] together.”

Kinkaid hired the Finney Search Group, based out of Maryland, “to cast a very wide net.” FSG works with independent schools to place various teachers, administrators, and even coaches. Their mission statement is to “surround students with faculty and administration that will support their personal growth, become mentors and advocates, celebrate their diversity, and create life-long friendships through teaching and coaching.” In addition to these efforts, Dr. Trusty and Ms. Marie Stien, Director of Human Resources, also posted the position in many “usual and unusual places” for those searching for leadership positions in independent schools.

“We think we did a very thorough job of a national search,” said Dr. Trusty, speaking on behalf of the Kinkaid search committee, of the group’s efforts to amass a candidate pool with experience and similar visions for Kinkaid.

Once a candidate was identified, Dr. Trusty would initiate the first conversation over the phone. From there, the next step was a video call over Skype. After that, the final candidates were invited on campus.

When Dr. Trusty met Mr. Behr, his first impression was that he was sharp. “I could tell that he thought deeply about topics,” said Dr. Trusty. Dr. Trusty also admired Behr’s openness to seek feedback from others for important decisions and his shared values of the school.

So what edged Mr. Behr over the numerous other candidates? Kinkaid received feedback from parents, students, faculty, the Upper School Parent Council, and the Board of Trustees. These parents were chosen with recommendations from the Deans’ Office and selected for their diversity: not just ethnically, but also how long they’ve been with the school, and the ages of their children.

For Dr. Trusty, the moment he felt Mr. Behr distinguished himself from other candidates occurred when the topic of the still-recent ISAS accreditation report came up, as it did with many other candidates. However, Mr. Behr was the first candidate to ask whether it would be okay for him to view these reports. He wanted to learn more about how Kinkaid saw itself and how it was seen from the outside. “To me that was impressive,” said Dr. Trusty. “Obviously you can go on the website and find some information, but that response helped solidify that he was truly committed to knowing the school and knowing the community.”

Dr. Clayton, as Science Department Chair, spoke in a small meeting with Mr. Behr and other department heads. The department chairs, held a separate session from the entire faculty to talk about the strengths and challenges of each department. Based on their conversations, she thought that he was dedicated to the students, to their academic achievement and personal well being. He aligned very well with the values of the school. Finally, she was pleased that Mr. Behr “cares about the faculty’s opinion and input in creating a cohesive community.” After her first meeting, Dr. Clayton believed Mr. Behr to be very energetic, familiar with life in an independent school, and it was “pretty cool” that he was a science teacher, like herself.

So our first question is: Why Kinkaid?

Kinkaid is an excellent school with an excellent reputation and is in a location that my family has been interested in. We like bigger cities, and we’ve been in a smaller city for a number of years, so Houston provides that opportunity for sure. It’s location plus school, and those pieces come together to make a great mix for my family and for myself. Kinkaid is also a different opportunity for me—it’s a bigger school than where I’m coming from. It’s a school that has a lot of similar things in terms of an Honor Code and the four values. That sense of community that goes along with it is something I was looking for in a larger school.

What is the biggest draw about Kinkaid that you found attractive?

One of the things I looked at when I looked at schools is their mission and what they stand for. I really appreciate the mission, kind of going back to the core values. Also, how Kinkaid is forward-looking: it’s a great school but how it can become an even better school.

What are you looking forward to about Houston? About Kinkaid?

The larger environment, the new challenge. I’m an explorer when it comes to things like this. I like the challenge. I like the new. There are people in Louisville who are like, “That’s a big move, why would you do that?” And I say, “Because it’s exciting, because I like that sort of thing.” I’ve made big moves before, from one location of the country to another [from his hometown of Buffalo, New York to Louisville, Kentucky], and I like doing that. And my family is all on board with that too. Even Houston and Kinkaid, together, it’s just those new opps, a larger environ, a solid school that’s forward-looking.

What do you think will be the most challenging thing to adapt to at Kinkaid?

I think I need to know more. Will it be a student culture, a faculty culture, a rule or guideline that I’m not used to yet? At this point, I see differences, I don’t see challenges or difficulties. There will be a transition no doubt. I would say more of the more difficult pieces will be building those relationships back. There’s so many people to learn and …. to know. I think the adaptation will be rebuilding relationships.

What do you think the biggest difference will be from your last school?

It’s just a larger structure. There’s always a lot of coordination, even in a smaller school, lots of pieces. But the larger structure will probably be the biggest difference. Probably the very well-developed art programs to go along with a well-developed athletic program is a difference as well, not to say that we don’t have a good arts program at LCS, but it just doesn’t have the same footprint in the curriculum and the offerings.

Hypothetically speaking, what value would you add to the four core values?

Would you want to teach a class while acting as principal?

I do, I do like teaching. First year, probably not, because of getting all of the pieces of learning Kinkaid. But at that same time, I know that’s the best way to get to know students. It’s going to depend if there’s a section in sciences floating out there that needs coverage. Is there an Interim experience possibility? I think Interim is probably the biggest place I would start.

What do you want to achieve in the first year as Head of Upper school? What about in five years?

The first year is really getting to know the school, know the people, the faculty, the students, the mechanism of the school. It’s really figuring out how the train’s run, how things work at the school, understanding the traditions. It’s a lot of listening, learning, tweaking where you can, where you have new ideas you are bringing in, but it’s not making major institutional pieces that have not been set up by somebody else. Doing a five year plan is really difficult when you don’t have the first year done.

What is the most important thing for a student to learn in high school to take with them to college?

The most important thing is to learn how to learn. And every kid is different, but to learn how they can learn within every subject they are interested in or need to take. And you know it might be different, you know in math or English and history versus science. So when you’re at college and need to figure something out, they know how they learn that material best…taking that material and putting that in a way is useful.

How will you allow the arts to feel they are prioritized the same as academics and athletics, with regards to the community appreciation and celebration?

A lot of that is continuing the good work of promoting and understanding what’s going on. Communicating what arts activities are coming up, what are the very important times. Just like you may have a weekend full of championship games for a sport, you may have a weekend of arts events. The difference is that with arts events, there are generally fewer of them; there aren’t as many times to celebrate them. That means when you have those events, you have to do even more.

What was the most important factor in accepting the position as principal of the Upper School?

The most important factor: is it a welcoming environment? Is it an environment looking for a difference? It knows it’s great, but does it constantly look to get better? Being at a school that says it’s the best already and doesn’t look outside itself would not be attractive.

Are there any ideas you hope to carry over to Kinkaid?

I think some of the ideas come back to working with students and having them truly have the communication they need and the information they need. With parents and students, to make sure they feel supported. So if they have a question, they know where to get an answer.