The evolution of Snapchat 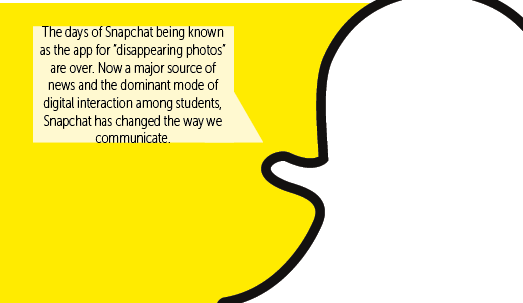 [dropcap]A[/dropcap]t the end Kinkaid’s first week-long Thanksgiving break, sitting at Joan’s on Third, a café in downtown Los Angeles, seniors Sarah Kate Cone and Sophie Mireskandari checked their phones as they waited for their brunch orders to arrive. As she usually does in her spare time, Cone looked at her feed of Snapchat Stories and clicked on Kylie Jenner.

Jenner had posted a story: a photo of her hands, adorned with clawed nail tips, that said, ‘I’ll be at the DASH store in an hour and 30 minutes.’

DASH was just three blocks away. They decided, Why not go see her?

When they arrived at DASH, a boutique owned by the Kardashian sisters, there was already a large group of people waiting. The sidewalk and entrance to the shop was blocked off, and a sign on the store read PRIVATE EVENT.

“Everyone who wasn’t paparazzi was on their phones, attempting to zoom in and take Snapchats of her through the window of the store,” Cone said.

Cone and Mireskandari grew bored of watching Jenner walk around the store through the windows, and they ventured into another shop. About 15 minutes later, they heard a lot of commotion, so they rushed back outside.

“We saw her trying to take a Snapchat with all the people that came to see her. It was funny because I looked at her Story later and there we are, in Kylie Jenner’s Snapchat Story! Right before she was about to leave, I was able to get a tall man in front of me to get a Snapchat of her on my phone,” Cone said. “It was a Snap-worthy moment. If we had never looked at our Snapchats, we would have never known that she was there just three streets away from us.”

Snapchat, a popular video/image messaging app with 100-200 million active users, has evolved significantly over the past four years from its first iteration in Sept. 2011. Now in version 9.20.0.0 and averaging roughly three updates per month, Snapchat has left behind its reputation as the app for disappearing messages and sexting app, and is now recognized as a source of news and a dominant mode of communication.

The app was originally developed as a way for transmitting photos and video, known as “Snaps,” to a specified contacts list. Users set a time limit for how long a Snap could be viewed (3 seconds, 6 seconds, etc.); after the time limit, the Snap would be deleted—essentially disappearing from existence.

The fleeting nature of the app is part of the reason for its popularity. Most students use the app primarily to engage in casual conversation with friends. As an alternative to SMS texting, it involves Snappers sending pictures (often selfies) and videos to a select list of friends.

Avid user Catie Asarch (12) appreciates the app for its simplicity. “I like the ability to talk to people without actually having to say anything,” Asarch said. “A picture really is worth a thousand words.” Jake Jacobe (9), who uses Snapchat to interact with his friends in a more social manner, said, “You can see expression—texts can be misleading.”

In many ways students even prefer Snapchat to email or even texting. “It’s quicker, and with texts, you feel a responsibility to keep up a conversation,” said Asarch.

“I Snapchat all the time,” said Cone, who guessed that she sends upwards of 50 Snaps a day. “I do them in the morning when I wake up, sometimes at breakfast, maybe in the car on the way to school, maybe one of my parking job or the person’s next to me, and then maybe some artwork or pictures of other people. I also do them at lunch, like ‘off campus,’ and then maybe some cool pictures of galaxies in Astronomy, and then there is usually something funny to Snapchat every day in Children’s Theatre. I take them at home, in the car, in all of my classes, after school, at dinner—especially if it’s of the SP roll at 400 Sage—and then at night right before I go to bed or am doing homework.”

Students seem to send anywhere from 15 to 100 Snaps a day. Most of these impermanent interactions are short, quick, and dependent on visuals to carry the message, rather than actual text.

As an Entertainment editor for the Upper School newspaper, Ella Morgan (11) frequently has to speak with many students for their stories. She observed a common frustration: student responses in person were often short and non-descriptive. Social media has affected how her generation communicates verbally, but Snapchat isn’t necessarily the cause, Morgan believes.

“People today are just focused on their fast-paced lives and sending a Snap is a lot easier than talking face-to-face,” Morgan said. “Our dependence on apps and digital communication could also affect how we think on our feet. When you’re texting someone, you have as much time as you want to think of an answer, and you also don’t always feel the need to respond, but verbally communicating doesn’t give you nearly as much time to think of the ‘right’ response.”

Despite any potential negative effects of apps like Snapchat and means of communication that favor and depend on visuals, students believe that, in terms of the future of communication, Snapchat has some of the right ideas.

“I do think that Snapchat has and will continue to come up with great ideas that could potentially shape or add to what communication could look like in the future,” said Cone.

With the company’s new updates, the app has also become a social media network that can be used to keep up with celebrities and companies in addition to communicating with friends.

Since its introduction in January 2015, students have started following current events with the Discover feature. In a survey of 280 Upper School students, almost 30 percent of the respondents said they relied on Snapchat Discover for their news.

Senior Pacey Ham said, “It’s a good way to become more informed, because the stories are fairly short and all the feeds cover different topics, which makes it entertaining. But at the same time it makes it difficult to become informed about topics in depth and take into account multiple viewpoints.”

Snapchat has also begun featuring “live stories,” or feeds of Snaps related to different, typically trending, events, which allows users to explore the world through the eyes of locals and everyday citizens.

“It makes learning fun,” said Blake Lattimer (12). “It brings you into the moment with somebody else and allows you to see things that are going on firsthand as if you were there.”

Snapchat has started focusing more on “live”, citizen-based coverage of events, from the recent San Bernardino mass shooting to the roller derby championship in L.A. For Jacobe, the app enables him to “see what everybody’s doing”—friends he doesn’t see a lot, as well as current events. When terrorist attacks unfolded in Paris, the app notified him immediately: “I wouldn’t have known otherwise.”