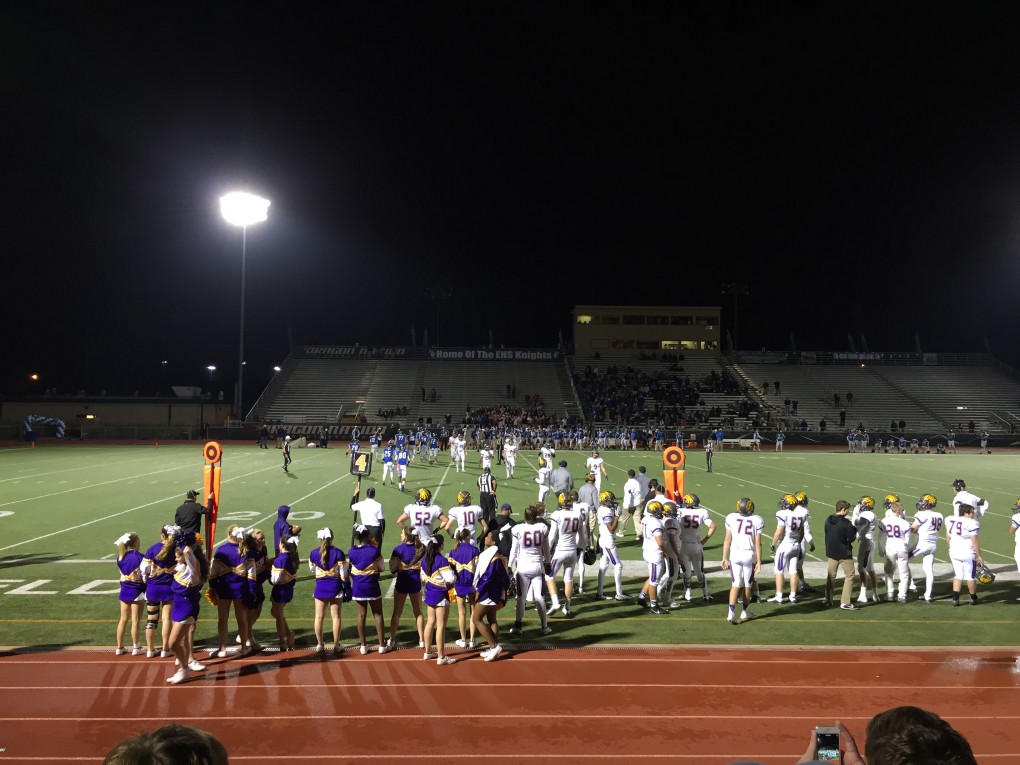 [dropcap]T[/dropcap]he Falcon football team went into the SPC Championship game as the epitome of the underdog. In contrast, the Episcopal Knights went into the game fueled by a recent 42-7 playoff win against Fort Worth Country Day and on fire from a hype video released in anticipation of the championship game. Having fallen to the Knights 21-47 in the regular season, the Falcons were looking to redeem themselves. And that is exactly what happened.

The Falcons and Knights matched up in the Large School SPC Football Championship at Dragon Stadium in Round Rock on Saturday, Nov. 7. This is the fourth time in five years that the Falcons have met their in-town rivals in the championship game.

Going into the game, the plan was to take more risks offensively– the team would attempt more on side kicks and trick plays.
“The offensive plan gave us more of a mental edge,” Rhett Cardwell (12) stated.
Near the end of the first quarter, quarterback Michael Goldak (12) passed to Rob Lahourcade (11) with 4:59 to go, putting the Falcons on the board 7-0 after Ace Nicolau (11) kicked for the extra point. Episcopal swiftly answered the Falcon drive with a touchdown and successful extra point, tying the game at 7-7 with 3:57 left in the first.

With 11:46 remaining in the second quarter, the Falcons kicked a field goal, inching their way ahead of the Knights 10-7.

In attempt to put more points on the board before the half, Hayden Rome (10) went for the onside kick, and Johnathon Thomas (10) carried for two touchdowns putting the Falcons in a solid lead 24-7. The Knights offense kicked it into high gear with only 4:37 remaining until the half. Jake LeVrier (11) closed the gap on the Falcons and ran for a touchdown though the Knights still trailed 14-24.

Marquis Hubbard (10) described that at halftime, Coach Larned told the boys to “compete half by half. Look at[their] field position and make the adjustments needed.” Larned predicted that the Knights would come out playing harder, faster, and stronger after the half, so the boys should be prepared.

After halftime, Goldak threw a bullet to AJ Armstrong (10) who made the catch and put the Falcons in a sturdy 31-14 lead with 8:50 left in the third.

[dropcap]A[/dropcap]nswering Armstrong’s big play, LeVrier ran for a touchdown giving the Knights momentum, but the team was still trailing the Falcons by a ten point deficit with 4:41 left in the third. Taking the momentum from LeVrier’s run, Knights defensive back Jaylen Waddle (10) made a swift interception and ran the ball for a pick six with a minute left in the third putting the game at a close Falcons 31, Knights 27. The Knights’ extra point was no good.

With 1:36 left in the fourth quarter, it is Falcons 4th down. There was talk in the student section about how the team should go about keeping possession of this ball. Will they run around in the backfield and let the clock wind down? Will they throw it in the end zone and risk an interception?

On third down, Thomas ran for a touchdown, but a holding call prevented the points to go on the board. On the next play, Goldak threw to Armstrong to keep the ball in Falcon possession which confirmed the Falcon victory.

Falcon students and parents stormed the field while the team was still shaking the hands of the shocked Knight players.

“We had more heart. We had less people, but we believed more,” Yell Leader Culver Stedman (12) commented. He continued to describe the amazing feeling the look on the faces of the devastated Episcopal student section gave him.
“Even though our student section was significantly smaller than Episcopal’s, the people that were there went crazy when we won. We couldn’t have been prouder,” he continued.

To read the recap on the regular season game against Episcopal, click here.