Special thanks to Sarah Gesell for her assistance with the Kinkaid School Archives.

[dropcap]At[/dropcap] a school as old as Kinkaid, deep-rooted traditions are part of the school’s unique identity and character. Having just celebrated its 109th anniversary, Kinkaid is the oldest private non-parochial school in Houston. The first of its kind, Kinkaid challenged and innovated the rules of education that had been long established and accepted. Mrs. Kinkaid was an unconventional woman for those times, and she recognized the value of listening to student voices and offering students a wide array of activities, arts, athletics, and classes. From the outset, Kinkaid has by no means been a traditional school with traditional values or educational programs, and yet tradition has become an integrated part of the school’s distinctive character, enthusiastically upheld and fervently preserved each year.

By definition, tradition is the passing down of customs or beliefs from generation to generation. “Something done for a while, a connection with the past, deemed important by the community,” explained Dr. Patrick Durning, who teaches World Civilizations and Psychology in the Upper School. “A tradition serves to unify and create a common Kinkaid experience.”

With tradition, certain experiences become valuable. These common experiences, passed down year to year, create a generational bond. As a result, there is a sense of pride in the traditions we exercise because they are a historical reflection of the school’s identity that current generations can share and participate in.

Throughout the school’s history, some practices, ceremonies and functions have stuck and become core facets of the school’s identity, while others have come and gone with fading remembrance.

English teacher Ms. Miller, who first joined Kinkaid in the late 90’s, explained that some of the new traditions introduced are a reflection of the objectives of the current administration, as well as the community’s views and identity as a school at the time. Since Dr. Andy Martire became Headmaster in 2013, the administration has emphasized “One Kinkaid” and sought new ways to embody that motto. This year, in the spirit of One Kinkaid, the entire school congregated for the first Convocation event.

“Tradition is one way that we define our community,” said Ms. Miller. “The rituals and traditions that a community embraces and celebrates become a projection of their values. I think that is why Convocation will become a tradition, because we have such limited opportunities to be ‘One Kinkaid’ and [because] that seems to be something that our current administration is very intent in suffusing throughout the school.”
Click to enlarge the timeline, originally published in Issue 2, Volume 69 of The Kinkaid Falcon. 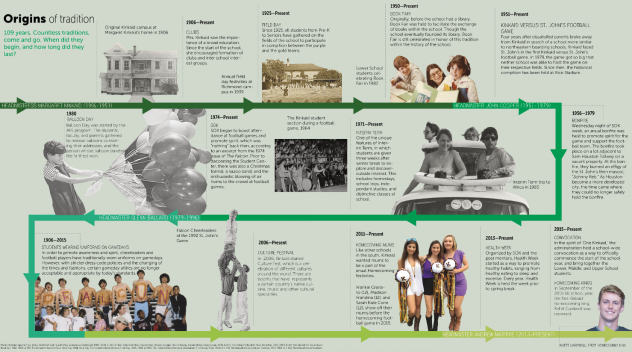 While the reasons and sentiment behind a tradition might remain the same, it must evolve as time passes. For example, while we still celebrate Homecoming and Prom with school dances, the dances are now held on campus with teacher chaperones, when originally they took place off-campus with parent chaperones.

The natural cycle of evolution and old values being forgotten and replaced by newer and better ones can be uncomfortable and elicits mixed reactions from nostalgic students, faculty, and families.

“Some of the newer traditions, to me, are meaningless. I will never remember sitting in the gym for a thirty minute Convocation, but I will always remember working in the Student Center during SOK week as generations of SOK presidents have done before me,” said Channing Fatjo (12), who is one of the current SOK presidents.

“To me, some of the new traditions are more manufactured and forced,” said Mr. Tom Wey, who has worked at Kinkaid since 1976. “Tradition is to unite the school and promote school spirit.”

Mr. Wey recounted many fond memories of traditions that were eventually discontinued, such as a school-wide bonfire before the big St. John’s game, attended by all Kinkaidians. He relishes the fact that Kinkaid for the most part has recognized the importance of tradition to promote camaraderie, even if those activities don’t currently include hosting a massive bonfire in the middle of the city. The point remains the same: School spirit and unity is fostered through a connection to the school and its core values.

Tradition is way to connect to the past and reinforce the common Kinkaid experience: Book Fair, SOK Week, Field Day, and the St. John’s football game are all things that a current student would be able to converse about with a student who attended Kinkaid in 1970. Tradition serves as a link to the past, a thread that ties the consecutive generations of Kinkaid students to each other. Former history teacher Mr. John Germann, who spoke in a joint assembly on Oct. 7 about the history of Kinkaid, commented that the success and longevity of the school can be attributed to the “stability provided by [these] traditions.” Mr. Germann, who retired in 2011 after 44 years of service, said, “If you don’t know where you’ve been, you have no idea where you’re going.”