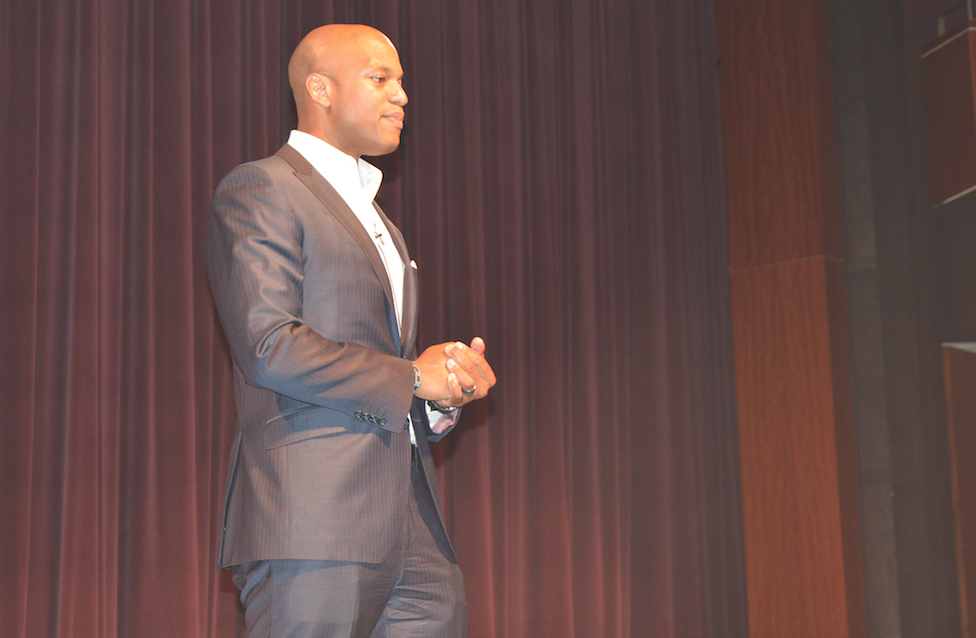 [dropcap]F[/dropcap]ather, author, visionary, and scholar, Mr. Wes Moore inspired many members of the Kinkaid School with his journey. After Upper School students read his book, The Other Wes Moore for required reading this summer, many had different opinions on the story. Andreea Calin (10) said, “I liked reading Wes Moore’s book because it gives us a new perspective on the ‘bad guy,’ while still showing what missteps he took in an effort to make the readers more aware of the things they do.”

Mr. Moore was the Moss Speaker on Tuesday, Sept. 1. His speech was both funny and serious. He was insightful, charming, and had a presence that captivated the entire Brown Auditorium.

Additionally, Mr. Moore talked about how the other Wes Moore “helped illustrate how thin the line is between our life and someone else’s life—how thin that line is between what we do and where we can go, both good and bad.” Along with being surprised about how much the other Wes taught him, Wes was also surprised by how strong his voice was. He emphasized on how his voice, or anyone’s, has the power “to change conversations and move dialogues; the biggest question is will you choose to.”

During his time on stage, Mr. Moore capitalized on the essence of time. He said, “Getting to know Wes helped me realize that there is a certain level of impermanence about everything that we do… And I am not sure why we have the hubris to continue to think that we always have time to do things.” This lesson among many others definitely sent a positive message to the student body. Jaelyn Hamilton (11) says, “I’m happy that he was able to share his views on what’s going on in Baltimore and the rest of the country. It’s important for everyone to be aware of the circumstances of others that they might not be able to relate with.”

Currently, Wes works with STAND!, a program out of Baltimore, which he established in order to work with teenagers in the criminal justice system. He also works with BridgeEdU, created to reinvent their freshman year of college and develop an easier pathway to their college careers. Aside from creating two successful businesses, Mr. Moore finds time to be a good family man and says that being a father is his greatest achievement.