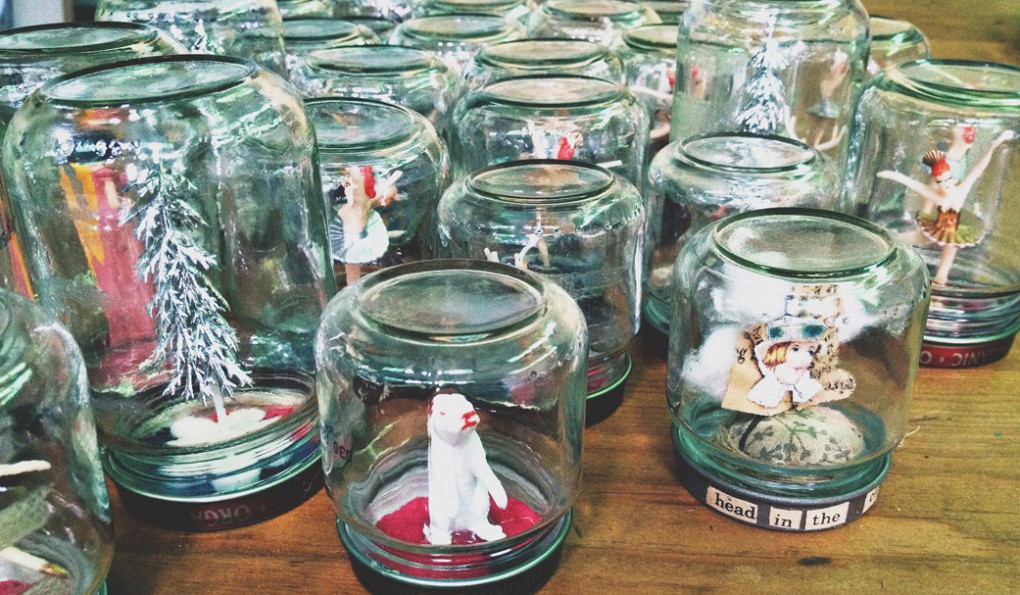 [dropcap]I[/dropcap]magine this: You’re strolling down the popular Hike and Bike trail in the Heights one evening. The exhausted, slow-setting sun catches the light on an object tucked up against the corner of a building. You wander closer to examine the globe-like contraption. It’s marvelous and magical: a tiny man and woman standing on a miniature blue toadstool. A beautifully scrawled note looped around the base: “Take Me.”

While some students may only know of her as the Photography teacher, those who have actually taken Photography with Ms. Farrah Braniff more accurately know her as “the really artsy teacher” who teaches students about street art and  photography, and can freehand calligraphy. What not many students know is that Ms. Braniff is also a street artist, known by her Instagram handle, @impossiblethingshtx.

Ms. Braniff was inspired by the Free Art Friday movement, where artists create pieces of art and distribute them throughout their cities for people to find and keep. Impossible Things is her project where she drops glass jars containing whimsical little scenes and constructions at various locations around Houston for strangers to discover and take home. The Intsagram account @impossiblethingshtx documents each of the one-of-a-kind art pieces and gives hints to the locations where they can be found.

About a year and a half ago, she began collecting Mason jars and tiny figures. The figures are not figures at all— they are teeny, tiny people, about the size of one’s thumbnail, and no taller than a paperclip. She buys the figures at model train stores and manipulates them into place in her giveaway jars.

“When I find the figures, [they] help me determine what needs to be in the jar with them, whether the other pieces are buttons, feathers or butterflies,” Ms. Braniff explained.

One series of her jars that encompassed figures, all holding suitcases. The scenes she placed the figures in were surreal: transporting them through a fantasy world in the jar, into another “space.” Another one of Ms. Braniff’s creations was comprised of delicate feathers cut from book pages, where “each feather was unique in its creation.”
“I really liked the idea of giving art away for free, that art doesn’t have to live on living room walls and over living room couches, but that it can be out in the world and you can interact with it,” said Ms. Braniff. “And the idea that you would leave something for someone and then you have no idea what will happen to it, with it, for it, you know? It’s just out there.”
After collecting supplies, she makes the jars in batches of 10 or 12 and shuttles the pieces around the city over the course of a day or two to drop them off. She strives to find places where the jars interact with its surrounding. For example, there’s the Heights Vinyl drop that received a jar encasing a man walking his dog under butterfly wings and feathers. Or the jar full of shiny buttons, fluttering butterflies, featuring a man and a deer, placed in one of the gazebos on Heights Boulevard. She likes to hide the jars to make the discovery more of a treasure hunt, giving clues as to where they are, either by tagging their locations on the specific drop’s Instagram post, or giving clues in the caption. While there are a few she hasn’t documented on Instagram, Ms. Braniff photographs all of her jar drops “because once they’re gone, I don’t have them anymore.”

Locations for the drops change—Ms. Braniff tries not to revisit the same locations for drops. She said, “I want to put them where I think people that might discover them would be really excited by them, so a lot of times I put them like down in artsier places, or places where I think that people who would like them would go.”

Ms. Braniff encourages the individual who finds her street art to share their treasure with the world via Instagram or some other social media platform. On the back of each “Take Me” tag is a note that reads, “Found it, Share it,” accompanied by her Instagram handle @impossiblethingshtx. But once it’s out there, “anyone can do whatever they want with it!”

Not every piece has been left for strangers to discover. “I purposely left a few of [my jars] out for specific artists,” said Ms. Braniff. “I hid them better than I normally do and then I tagged that person in the instagram photo and said, “This one’s for you.”’ One of these designated recipients was her friend Wiley, a local street artist whose artwork is centered around love.”I went and put one in front of his murals, so that was fun to kind of share the inspiration with other people out there.”

So, what’s next? “I’ve been thinking a lot about how I could make [jars] that light up, like little battery operated ones or something,” Ms. Braniff speculated.

She recently attended Burning Man, an annual festival where a temporary city or community is built and then dismantled in Nevada’s Black Rock Desert. The festival is also the origin of her newest idea: “I was actually inspired by Burning Man with all the lit up artwork, and it got me thinking maybe I should put lights inside the jars.”

Ms. Braniff is still fine-tuning the design of her latest Impossible Thing, so keep a lookout on her Instagram for her next drop-off to get the first light-up jar.