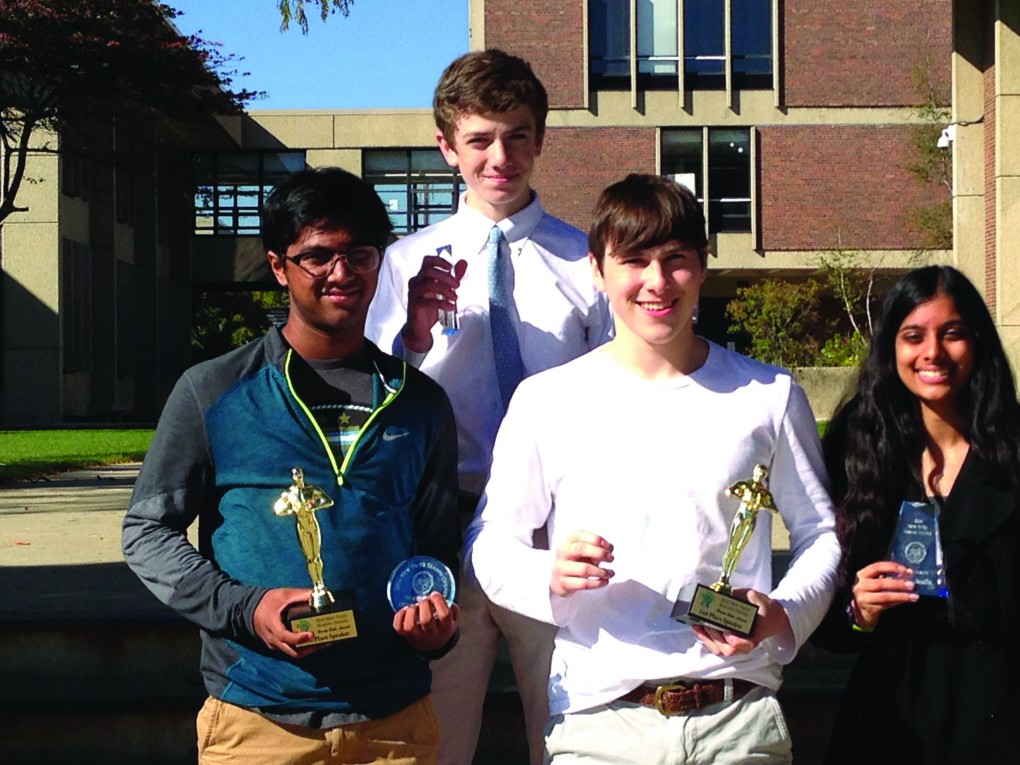 [dropcap]T[/dropcap]he Kinkaid Debate team has quietly become one of the best teams in Texas and they regularly compete nationally against the best of the best from around the country. This year’s squad has added a lot of new talent to the roster—and only lost one debater to graduation last year—and are hoping to bring home some trophies. “Last year we had very few seniors…all 11 people we sent to state tourney have come back and shown significant progress,” said head coach Mr. Eric Emerson.

The key to the debate team’s success starts at the top with Mr. Emerson and senior captains Rikki Bleiweiss and Nina Kalluri. Mr. Emerson described his coaching style as “student centered,” and he powers the students to perform at the best of their ability.

“Mr. Emerson has helped me learn about how to debate and what debate is all about. I can discuss any arguments that I am thinking about and ask him about anything I do not understand,” said first year debater, Rahul Pupat. (10)

Rahul along with many other members of the debate team have already attended multiple tournaments around the country. Recently, Kinkaid brought team members to Chicago for the New Trier Township HS tournament. Sam Richey (10) and Sabrina Bajwa (10)  reached the quarter finals of the tournament. Reece Rosenthal (12)  and Arjun Redd (11) also found success, and were named the 2nd and 13th overall speakers out of 204 at the tournament.

Much of the team’s success began over the summer. Many of the debaters attended six or seven week debate camps at schools like UT, Michigan, and Northwestern. Sam Richey (10) and Rikki Bleiweiss credit this extra work for their improvement this year.

“These camps are really helpful. You get to meet the people that are going to be your biggest competition throughout the year. You also get instruction from some of the best college debate coaches in the nation,” said Richey.

“Not only have I made friends all across the country, but I’ve had the opportunity to travel a lot. I think debate’s also gotten me exposure to a lot of subject areas we normally don’t talk about in school that much, such as philosophy, politics, economics and government,” said Bleiweiss.

For many of the top debaters, debate is a huge time commitment. They need to prepare and do research for their topic weeks in advance.

“If there is a tournament coming up soon, then I might try to get in two-ish hours every night, plus whatever work that we do at school. I do about 25 hours a week including tournaments,” said Richey.

Debaters receive the topic for their tournament in advance, and have a few weeks to do research and prepare their speeches. A recent topic debated was Resolved: a just society ought to presume consent for organ procurement from the deceased. Most of the time during class is dedicated to research and preparing speeches. Once at the tournament, the team/person will need to qualify for the knockout stage by winning a certain number of debates in the preliminary rounds. Speaker points are used to decide which team advances in case of a tie. Once debaters reach the knockout rounds, the competition becomes much more fierce.

“It’s hard to say who our toughest competition is this year, but there are a lot of schools that are doing really well. We debate many schools from across the nation such as Westminster (Georgia), Pace (Georgia), Greenhill (Dallas), St. Mark’s (Dallas) and Centennial (Maryland),” said Richey

Kinkaid Debate is now one of the top programs in the nation and are showing no signs of slowing down. Mr. Emerson and the team are looking forward to tournaments this year at the University of California, Chicago Glenbrook, and University of Texas.