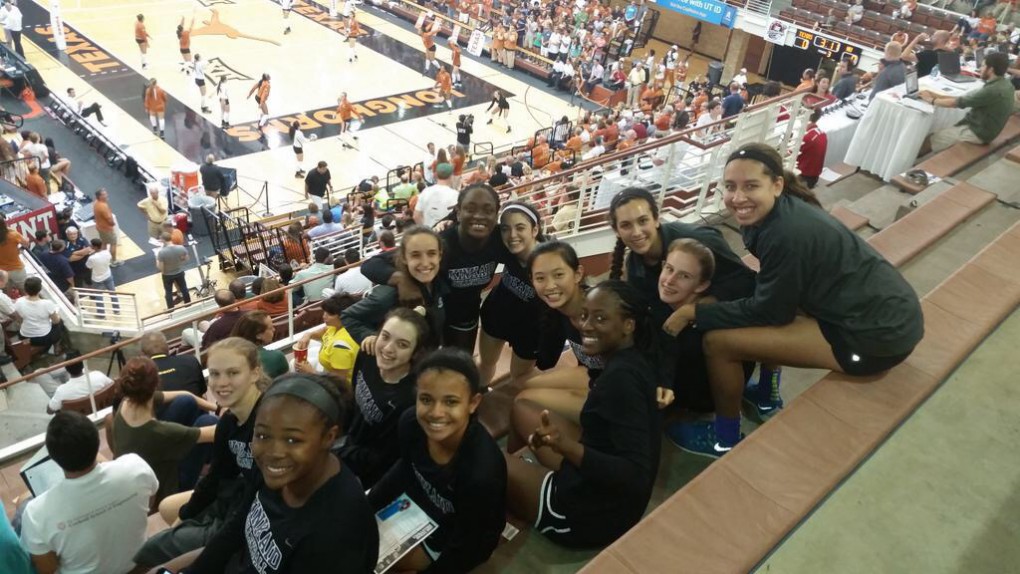 Pictured above: Girls Varsity Volleyball recently travelled to Austin and even got the chance to catch a Longhorn volleyball game!

Girls.
[dropcap]J[/dropcap]oining a new sports team at the varsity level can be intimidating to anyone, but imagine joining as the newest and youngest members of the Upper School. However, for the four new freshman players joining the girl’s varsity volleyball team, Madi Malouf, Kate Petrovic, Onuchi Ndee, and Skylar Fields, this hasn’t been much of a concern. According to middle blocker, Malouf, “Everyone really welcomed us with open arms and were always willing to help and show us where to go.”

Based on the past three years, with only one freshman making the girl’s varsity volleyball team each year, it was surprising how many freshmen made the team. “I actually didn’t expect that many to make it, but I also know they lost a lot of players last year and would need more recruits this season,” said Petrovic, one of the newest team setters.

One of the most noteworthy aspects of the varsity volleyball team this year is the encouraging and positive atmosphere. Everyone is pushed to be a leader and work together. Malouf noted, “it can be difficult to know your place as a freshman, but I still try to be as encouraging as I can, along with the rest of the team.”

The other two freshman, middle hitter Ndee and outside hitter Fields, have also been great additions to the team this season. With the help of the newest players, the girl’s varsity volleyball team hopes to work hard and win as many games as possible this season.

Coming off of a fourth place finish last year in the SPC tournament, this team is back with vengeance, and are determined to work even harder to fulfill their championship goals.

After two tournaments and four regular season games so far, the team holds a 9-10 record. There are 13 remaining games before the SPC tournament, eight of which will be played in the Melcher Gym. Two games to keep an eye on are against Kinkaid’s biggest rivals, Episcopal on Oct. 1st, and St. John’s on Oct. 22nd. Although the team defeated both teams multiple times last year, both offer elite competition. Their next game is at home against St. Andrew’s Episcopal School on Friday.
Boys.
[dropcap]M[/dropcap]ost of the time, boy’s volleyball is overlooked or not given as much attention as other sports, but this year they want your attention—and they deserve it. According to captain Jack Schuette (12), this might be the best boys volleyball team Kinkaid has ever seen, and he is not backing away from that statement.
“We have more athletic ability this year than we have ever had. We can back it up on the court, and we will,” said Schuette, who at 5’7 is the setter on the team. During Schutte’s tenure on the team—he’s played since tenth grade—his own leadership skills have improved dramatically.
The Kinkaid community should know a couple things about the boys volleyball team. First, despite many misconceptions, they are very athletic and many of the players are multi sport athletes. As Coach Holt says, they “go toe-to-toe with club players that play year-round.”

Second, their games are very exciting and they would love more support. “We played an away game today in a packed gym, and it was a blast. I’d love to see that fan support for our team at Kinkaid. It’s what I hope for every team, really that they are recognized by their peers for their excellence on the court and field.”

The team finished seventh last year at SPC, but with the help of Lucas Mason the team can reach their full potential. Lucas is the their only returning All-SPC player and according to Coach Holt the way to maximize his potential is to not sit him during a game, “Lucas is an intimidating force on offense and defense and this year we simply don’t take him off the court. He excels in all aspects of the game.”

The team takes on YES Prep West at home at 5:30 on Thursday, Sept. 17. Hopefully the team can back up calling themselves the best boys volleyball team Kinkaid has seen. Everyone should go support them during their quest for greatness.