Not an Ordinary Freshman 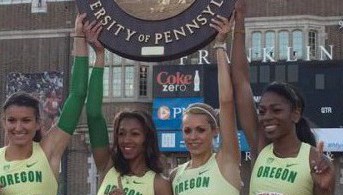 [dropcap]I[/dropcap]t was a hot, sunny Saturday afternoon in Eugene, Oregon on June 13th, 2015. The NCAA Championships were underway at the University of Oregon’s legendary Hayward Track and Field Stadium. At 3:20 p.m., eight women lined up to run the 800 meter final. The gun went off and the race she dreamed about since she was a little girl began. In the first 100 meters, senior Natoya Goule, a Clemson runner, was in the lead by 10 to 15 meters and maintained the lead at the end of the first lap, clocking a remarkable 56 seconds. Goule looked to become the next national champion. Suddenly halfway through the second lap, she began to slow down substantially and a tall, long-legged Oregon runner closed  in on her. With 200 meters left in the race, the Oregon runner caught up with her and took the lead.  She won the race with a blazing time of 1:59.

That Oregon runner is Raevyn Rogers, of the Kinkaid Class of 2013. It was Rogers’ freshman year. That’s right. As a freshman, Raevyn Rogers won the 800 meter national championship. Later that day, she found out she helped her team win the NCAA National Championship. She’s no ordinary freshman.

Raevyn did not have an easy path to success. During her first winter season at college, she had what she called an “emotional breakdown”.

“My rough patch was during indoor track season. It was my first time running the 800 meters Indoor, and I hadn’t run indoor in 4 years since I pulled my hamstring in 2011, so that was a challenge. I didn’t make it to NCAA indoor or did as well as I thought I would.”

Raevyn also struggled with her academic life, “The academic and athletic part of my career was a bit easier in the fall term, but it really did become a challenge in the spring when outdoor track season really started to get into gear. I was traveling to meets almost every two weeks.”

Rogers stressed that time management is key to success for student-athletes. “Time management is important in general but it is very key for student athletes because you have to be able to complete assignments and still have to sleep and recover from workouts.” Even though she struggled during the first part of the year, she got through it and was ready for her spring season.

Rogers started off her spring season with a bang winning the Penn Relays Sprint Medley Relay. She then went on to win Pac 12 Conference Championship in the 800 meters and punched her ticket to the NCAA Championship Meet. During the NCAA, she was calm and during the race even when Goule went out way too fast, Raevyn told herself to keep calm, “During NCAA my motif was to really just run my race. When Goule went ran a 56 first lap it didn’t seem like she was as far as it looked on the screen. She looked as if she was closer during the race so I didn’t even notice her being so far.”

This season she intends to reach for higher goals and to make the Olympic Team. “My goals for this upcoming season are, with God’s help, to do better than last year. I want to tune up and fix things that I didn’t do last year like establishing a stronger endurance base.” Roger’s strives to complete three main goals: to “help [her] team win NCAA Championship”, “to make the Olympic team”, and to “potentially win a gold medal.” She knows it will take a lot of work, but she is confident in her talent. She’s no ordinary underclassmen and has every chance to become greater than she already is.

Rogers has one piece of advice for Kinkaid students. “At times, you may not see the light but, it can’t be dark forever and hard work will pay off as long as you put hard work in. Have fun in whatever you do because if you love something and are really passionate about something but, you aren’t having fun, you’ll lose interest. So just go for it. I don’t like to say the skies are the limit because there’s things past the skies. So go past the skies and just be great! I believe in you.”

We believe in you too, Raevyn.