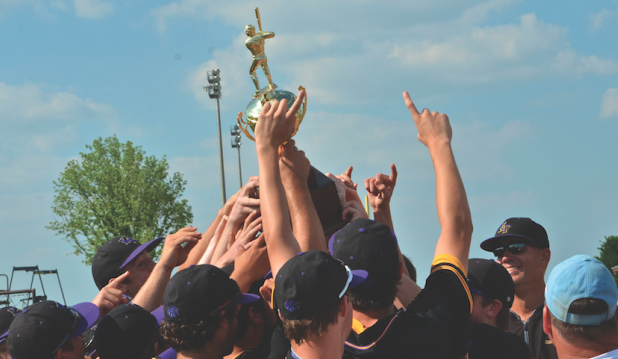 [dropcap]S[/dropcap]econds after Johnathon Thomas (9) caught the St. Mark’s fly ball in right field, the Falcons swarmed centerfield. Pitcher Will Gaus (12), first baseman Joe Beeler (12), and shortstop Michael Goldak (11) were crushed under nineteen of their sweaty teammates in an ecstatic dog pile.
“Being at the bottom of a dog pile is very painful. But it was an amazing feeling, being able to celebrate with my team,” laughed Goldak.
After a nine-year SPC championship drought, the boys baseball team blazed through their SPC competition to capture the first Division I SPC title in their very first season as a part of the difficult division.

Throughout this season, players like Goldak noticed a change in their strength of schedule, highlighting the fact that Coach Maas set up many of their early games against talented 6A public schools. This rigorous competition showed as the team got off to a very slow start to the season.

“All of our losses were really close against all of these 6A schools,” Goldak recalled. He added, “It shows that we were ready right off the bat from the beginning of the season.”

The experience of playing major competition benefited the team during their SPC play, as they held their opponents to just three points in each of their SPC tournament games.

“This year, it didn’t look too good going into the season. We managed to defy the odds and with hard work, our outcome was not the usual one with a team that only had a few returning seniors,” explained Ford Young (10).

The Falcons’ success in the tournament meant the most to the senior captains of the team. The long off-season practices and hitting sessions all four years had finally paid off for this year’s graduating class.

“As a senior, it’s very exciting to end my athletic career with an SPC victory. After all the hard work and the previous years of coming up short, it’s very fulfilling to have the hard work finally pay off and for us to reach our end goal. I will cherish this season along with all my Kinkaid baseball memories for many years to come,” said Berkeley Fondren (12).

The championship game against St. Mark’s School of Texas was close throughout, and the game ended 5-3.
“Everyone was beyond excited. The feeling of winning was surreal. We knew we could do it, but it’s different thinking about it as opposed to actually doing it,” said Young.
This year’s team showed the persistence of the boys’ baseball program. After multiple years of underachieving seasons, the team’s climb back to glory shines a bright light into the program’s future.
“This dominant tournament run shows that Kinkaid’s baseball program is a quality program that is capable of competing for the SPC championship every year,” said Goldak.