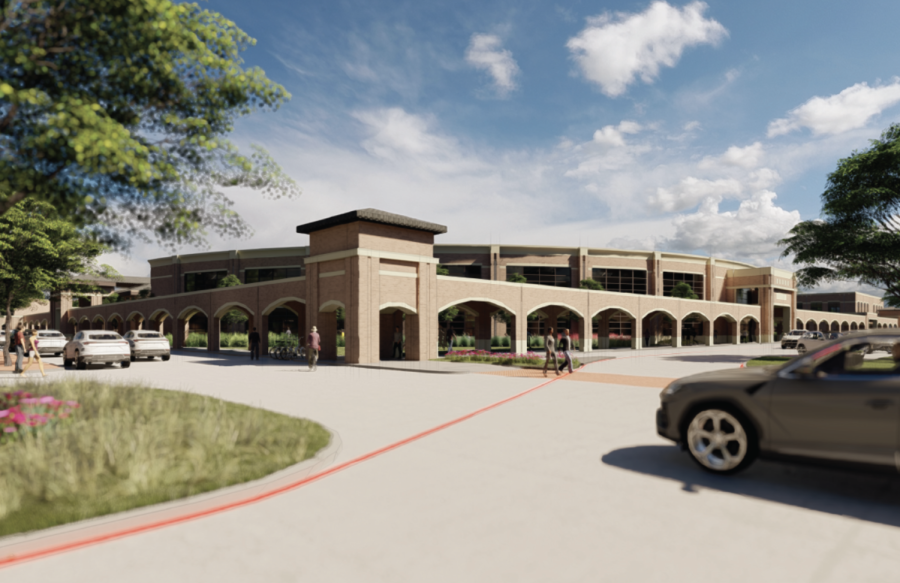 A rendering of the new Upper School shared with the community at an assembly on Sep. 13.

“Now in our 116th school year, we are embarking on a historic and ambitious plan to create a lasting advantage for yesterday’s, today’s, and tomorrow’s Kinkaid students, faculty, staff, and community.”

So read the beginning of Head of School Mr. Jonathan Eades’ email to the community on Sep. 8.

Mr. Eades informed community members that a 4-year plan to rebuild portions of campus will be entering Phase One. The details were further discussed at an Upper School assembly on Sep. 13.

Construction in Phase One includes the removal of Harrison House and construction of a new building intended in its place.

“In preparation for Phase Two, the new building will be designed to temporarily hold over 75 percent of Upper School classes, and those classrooms, along with a technologically advanced ‘learning village’ of temporary classrooms, will provide both a larger and upgraded learning environment for our current students,” Mr. Eades wrote.

Other upcoming changes include the Doggett Gym being repurposed into the new central plant, and the tennis courts by the Fondren Gym being replaced by a field house which “will offer Physical Education and Athletic Department a more flexible and multi-use space.”

Fundraising will continue as the school enters Phase Two, anticipated to begin in late 2023 or early 2024. It entails the total removal of the current Upper School and the construction of a cutting-edge, two-story new Upper School in the same location.

Construction of the new Upper School is estimated to end in early 2026. Then, the building on the Harrison House site will be used to expand space for Lower School classes and student support programs on the first floor, and to consolidate several all-school administrative offices on the second floor.

During this final phase, the Visual and Performing Arts Department will utilize newly designed studio and classroom spaces in the Student Life Building.

Before signing off, Mr. Eades encouraged the community to be on the lookout for more information about the plan for the campus.

“In the coming weeks, we will launch a dedicated section to the School’s website which will include further information about the campaign, and I promise to provide regular, detailed updates and plans about each phase of construction,” he wrote.