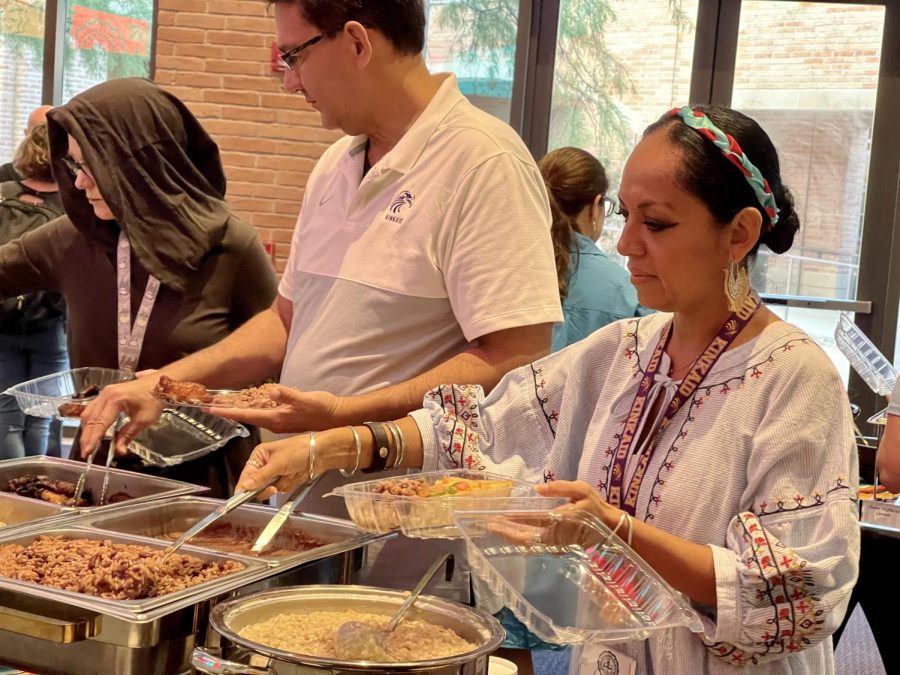 Hispanic foods and a colorful sign on the large screen in the Ogilvie Lobby invited faculty, staff and employees to enjoy an event marking the start of Hispanic Heritage Month.

The month was celebrated on campus at an event  called “el desayuno,” which means “the breakfast.”  It was organized by the Viva la Raza club with help from the Student Diversity Leadership Board.

“We do this to get the Kinkaid employees pumped up for the month to come,” said Mrs. Angela Wainright, Upper School history teacher and a co-sponsor of the club. Mrs. Wainright’s co-sponsor is Ms. Ally Lavalley, Upper School science lab coordinator.

The desayuno was started years ago, prior to the founding of the Viva La Raza club, and was originally hosted by Spanish teachers Mrs. Vanessa Zamudio-Lara and Mr. Esteban Longoria, who still get involved with the event and other Hispanic Heritage month celebrations.

Chef Mark Harris surprised the club with different types of cuisine every year for the event.

“Sometimes he’ll do Cuban, Puerto Rican, or something else, and he does a really good job of representation,” Mrs. Wainright said.

The club plans to host one event per week from Sep. 15 to Oct. 15. Events will include a screening  of the movie “Selena” in the library auditorium on Sep. 21.

All students and faculty who identify as Latino are invited to bring their favorite food to an event called “Fiesta en la Biblioteca.”

“They write a little card to explain to everybody else what it is, so they learn, like an eating and learning experience,” Mrs. Wainright said.

The Viva la Raza club also plans to host an all-school assembly. This year there will be an evening program with a guest speaker

At the end of Hispanic Heritage Month, the Day of the Dead “ofrenda” altar will be set up.

“We all come together and that’s pretty much how we end the celebration, by having the ofrenda at the end of the month,” Mrs. Wainright said.