Sophomores learn about reality of the Holocaust 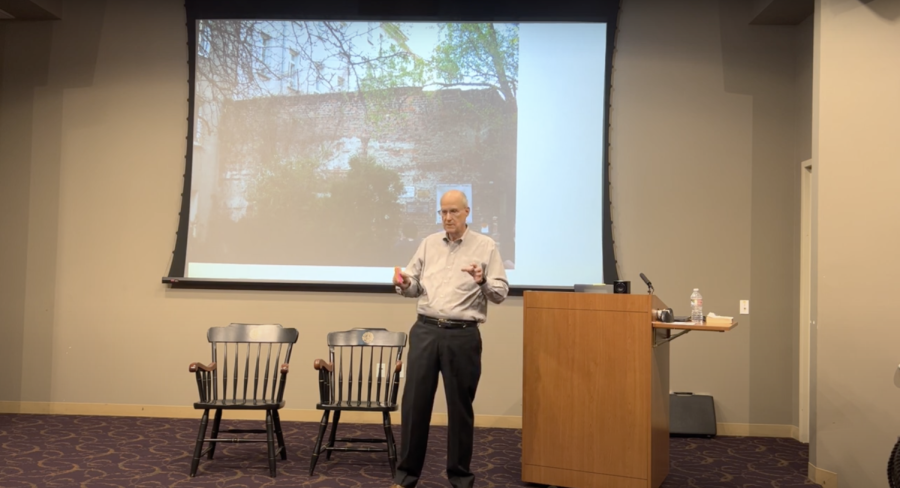 Mr. Craig Cavanagh, substitute teacher, met with the sophomore class to educate students on the Holocaust.

Once when he substituted for an English II teacher, Mr. Cavanagh realized how little students knew about the Holocaust. The sophomore English curriculum comprises “The Sunflower,” a novel that asks whether or not an Schutzstaffel officer should be forgiven.

“At school, really the only education we’ve gotten on the Holocaust was a little bit in history in eighth grade,” said sophomore Sam Ferber.

Some students received knowledge about the Holocaust from outside sources such as museums, but other students have little information.

After noticing the gap in knowledge in sophomores, English II teachers decided to bring in guest speakers, including human rights lawyers, who were experts on the Holocaust.

After Mr. Cavanagh gave an impromptu lesson to a group of sophomores while substituting for a teacher, the English department realized he would be an ideal guest speaker.

Mr. Cavanagh said he always had a love for history, but the question of why the Holocaust occured weighed on his mind.

“It’s the idea that a cultured, sophisticated society would go so far to the extreme that they would select Jews specifically, but obviously others, the Romas and the Sinti people, for extermination to satisfy a fantasy,”  Mr. Cavanagh said.

Mr. Cavanagh said when he was a teen in the 1960s, there was no Holocaust studies course that he could take. He took his education into his own hands and studied deeply into history and visited places around the world that were affected by the Holocaust like Auschwitz.

As Mr. Cavanagh’s knowledge on the Holocaust expanded, he recognized the gap between what the public saw the Holocaust to be and what more there really was to learn.

The Holocaust is the term used to describe the period of history where the Jewish people were targeted by Nazis, but Cavanagh insisted it went beyond that.

He shared with sophomores the economic, political, religious and social drives for how and why the Nazis wanted power.

“It wasn’t just one day the Germans woke up and said, ‘Oh, well let’s do this,’ he said. “It has deep, deep roots in antisemitism.”

Mr. Cavanagh said he hopes future generations can have an awareness about the Holocaust that previous generations lacked.

He has worked as a docent for 25 years at the Holocaust Museum Houston.