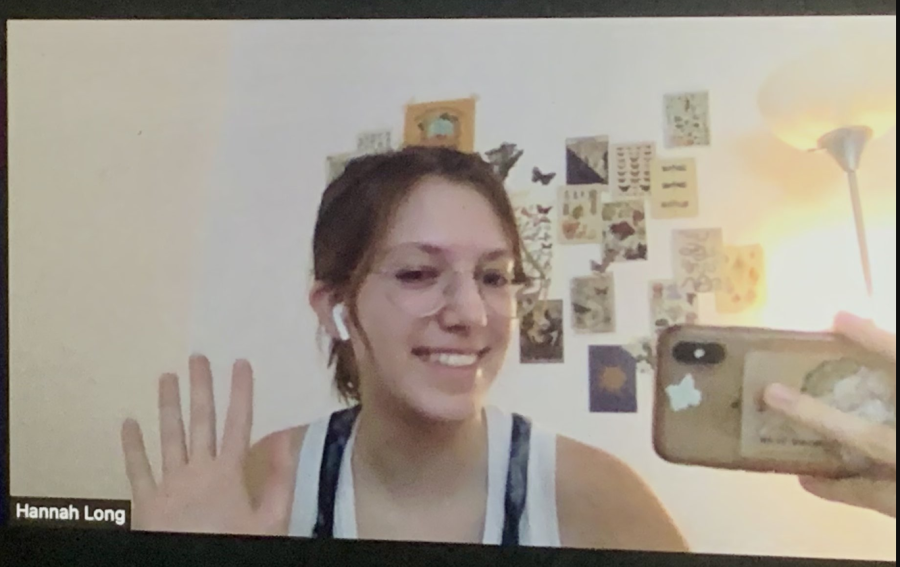 Sophomore Hannah Long logs onto a session with their buddy on Sep. 3.

Sophomore Hannah Long clicked an icon on Zoom, the video conferencing platform, eager to enter their first meeting with a Ukrainian student through the ENGIn English tutoring program. What emerged was a cultural education and long-lasting bond.

Wanting to directly connect with students in Ukraine in light of the recent conflict, Long began working with ENGIn, a nonprofit that pairs Ukrainian students with English speakers for free online speaking practice.

“Like many people, I saw what was happening and wanted to help directly but could not do much more than donate at the time the invasion had started,” Long said. “The Russia-Ukraine conflict was the first time in my life that a war had broken out when I was old enough to really understand what was going on.”

Interacting with Ukrainian students who are mentally and emotionally taxed in the wake of the war is difficult without proper training. Long described the multi-step orientation process.

“Once accepted I had a training session with about 20 other new volunteers,” Long said. “We covered how to communicate with our speaking buddies, lesson plans, scheduling and how to handle sensitive topics like the war currently going on in Ukraine.”

Long, who was partnered with a young girl of similar age, described the tutor/student dynamic as being odd initially, but it became more natural.

“Over time it became easy and the sessions ended up being fun,” Long said.

ENGIn provides lesson plans for speaking and vocabulary practice to all volunteers. Long used those as a starting point and customized them to what is best for the two of them and what could make the sessions more engaging.

“Over the past few months, we have become friends and have a good time talking in our weekly meetings,” Long said.

According to their website, one of ENGIn’s main goals is “cross-cultural connection” for students in Ukraine and their mentors across the world.

Long admitted having learned a lot about Ukrainian life and culture and found many commonalities despite living “literally across the planet.”

“We have things in common like our mutual love for pizza, movies, and milkshakes,” Long said. “I have also seen what life in Ukraine is like outside of the war from her stories, and even when the bomb sirens go off during a lesson.”