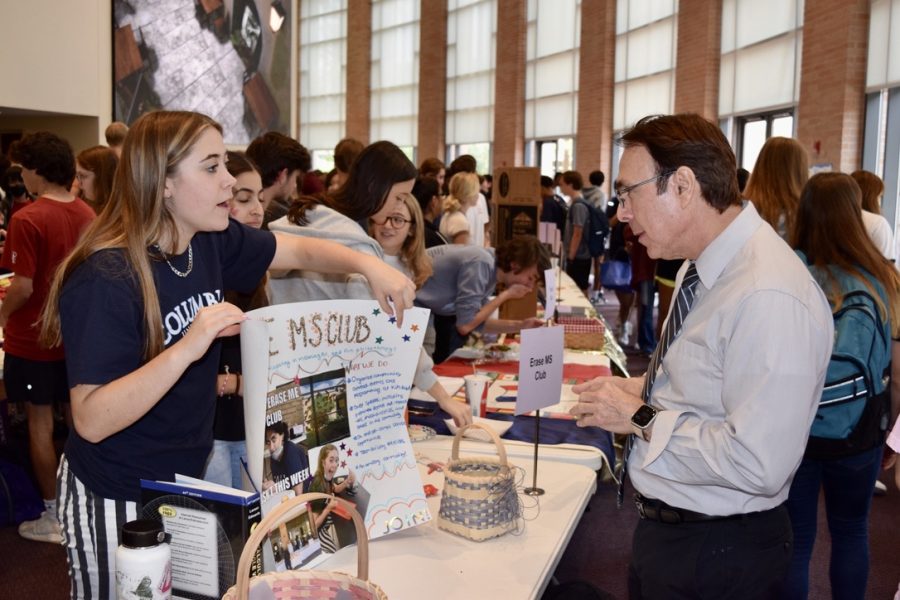 Club Fair was in full swing with students eating and shuttling from booth to booth to strike up conversation with club presidents, officers and sponsors about the organizations that piqued their interest. The fair gives student-run clubs a chance to promote themselves to the Upper School community.

The annual showcase presents clubs with a one-of-a-kind opportunity to lure new members using methods ranging from posters to conversation to games to the most popular attractions:  sweets and snacks. Students are given a chance to peruse a wide variety of topics by simply taking a step over to different tables.

“This year was my first club fair,” said Ellie Mehta, a sophomore. “I was overwhelmed with all of the choices, but I liked being able to see everyone’s interests in one room.”

Clubs help Upper School students connect with a community that shares their hobbies and values; for some, it even helps them fan the flame of a new fascination.

“I’ve always been interested in ceramics,” said Ethan Jefferson, a sophomore. “I joined the club after Club Fair to try and learn more about a cool art form.”

Just 19 clubs were re-approved at the end of last year by Mrs. Erica Baker, the Upper School’s coordinator of student life. The low approval rate allowed dozens of new clubs to make their debuts at this school year’s fair.

Among the new clubs was “Card Games Around the World,” which seeks to introduce card enthusiasts to new styles of play from across the globe and host friendly tournaments.

“Our club was made to show our favorite games from around the world that people might not know, such as President from China or Whist from the U.K.,” junior Ben Evans said. “You’re not going to find some of these games anywhere else in the city, really, so we wanted to bring them to the eyes of the community.”

Lili Lassoued, a sophomore, founded the endangered species club this year, which seeks to bring awareness to seldom spoken-of species that are at risk of extinction.

“As an animal lover, I’ve always wanted to bring more awareness to species that we’re at risk of losing entirely,” she said.