Students grow in their artistic abilities through magical one acts 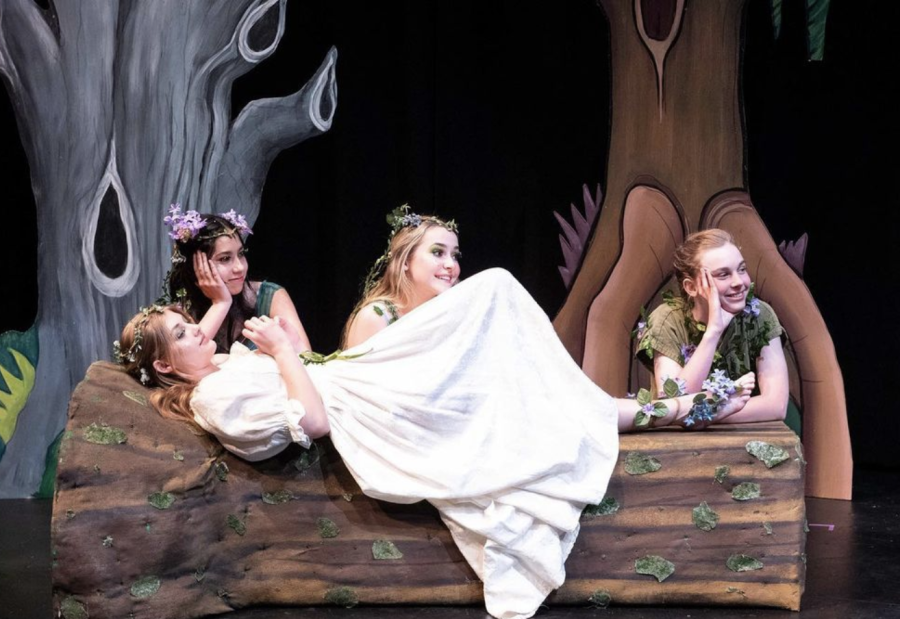 A scene from "Duine," Van De Mark's one act.

“It’s not only the director who is the storyteller, but also the actors since they’re the ones performing,” said senior Anna Duarte.

This was Duarte’s biggest takeaway from working on one-act plays. Duarte is just one of the seniors who directed a one-act play this spring.
Mia Van De Mark, another senior who directed a one act play, said to become a director for a one-act play, a senior generally needs to have shown an interest in theatre and possibly have taken the theatre classes offered in the Upper School, but that is not a requirement.

“It’s a really fun class to take if you like being creative,” Duarte said.

After the classes, rehearsals began, which is where Van De Mark said her challenges came.

Her play, “Duine,” which is a Celtic word for mortals, is not set in a modern time, but in a mythical fairy tale land. This, along with the need for transitions across her play’s 10 scenes, made the rehearsal process more complicated.

“I had to have special costumes, and my characters had to speak in heightened language,” Van De Mark said.

Duarte mentioned other challenges as well.

“There were over 60 people coming to audition, so we had a tough time choosing actors,” Duarte said.

The decision making process for the seniors was ultimately a challenge since they couldn’t cast everyone, and so many talented students auditioned.

“The spots were limited, but we are still encouraged to audition,” said freshman Shelby Haskett. Haskett auditioned but didn’t get cast.

Van De Mark and Duarte encouraged actors who auditioned for the one acts to audition again, whether that be for the fall musical, next year’s one-act plays, or whatever opportunities come along.

“There will always be a place for you in the one-acts program,” Van De Mark said.