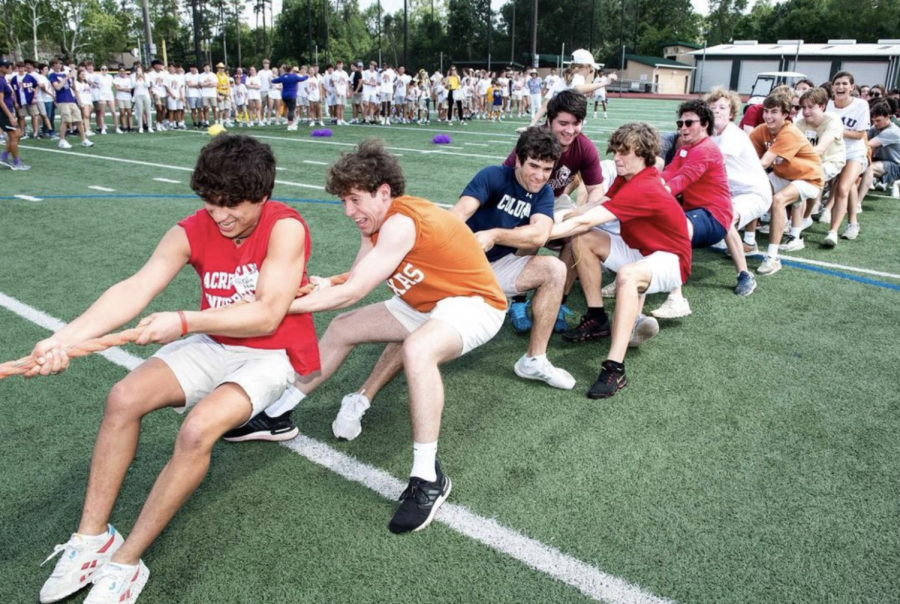 The senior tug-of-war during Field Day sealed the purple team's victory against the gold team.

“Field day is my favorite time of year because it is a great way to have fun during the school week, and relieve stress,” said freshman Kristopher Carlson.

After the opening remarks by head of school Jonathan Eades, the games began.

Events were organized by grade level, from the Pre-K classes circling the maypole to the famed Upper School tug-of-war. Points for the Purple and Gold teams were tallied throughout the competitions to decide the winning team.

“I love getting to compete against my peers during the events,” said junior Leo Zeng.

The purple team was crowned champion of the 2022 field day. The team prevailed over the gold team, winning all four tug-of-war events in the Upper School.

After the conclusion of the field events, the carnival began on the Falcon Green. There were games and rides for all ages, such as the popular Melt Down, Dixie Twister chair swing, Bungee Trampoline and the Trackless Train. There were also games such as Bingo, Pick-A-Chop, the Dunk Booth, Win-A-Fish, the Pocket Lady and a cakewalk.

In addition to the rides and games, there were many food booths serving tacos, burgers, pizza, hot dogs, Frito pies, snow cones, cotton candy, dippin’ dots and fried Oreos. There was also a Falcon Bakery where visitors could buy homemade goodies baked by parents and grandparents. Students’ fathers grilled together, a tradition that goes back several decades.

Field Day was first held in 1925 and is one of the oldest and most cherished traditions at the school. The first Field Day was held at the Elgin campus in 1925.

Kinkaid expanded to the Richmond campus in 1937, and because the Richmond campus had a new gymnasium, Field Day became larger than ever. It included folk dances, father-son softball games, a mother-daughter dance, and a Middle and Upper School dance.

Field day has become a significant fundraising event, with proceeds going to support the academics, arts and athletics.