The debate over professional dress 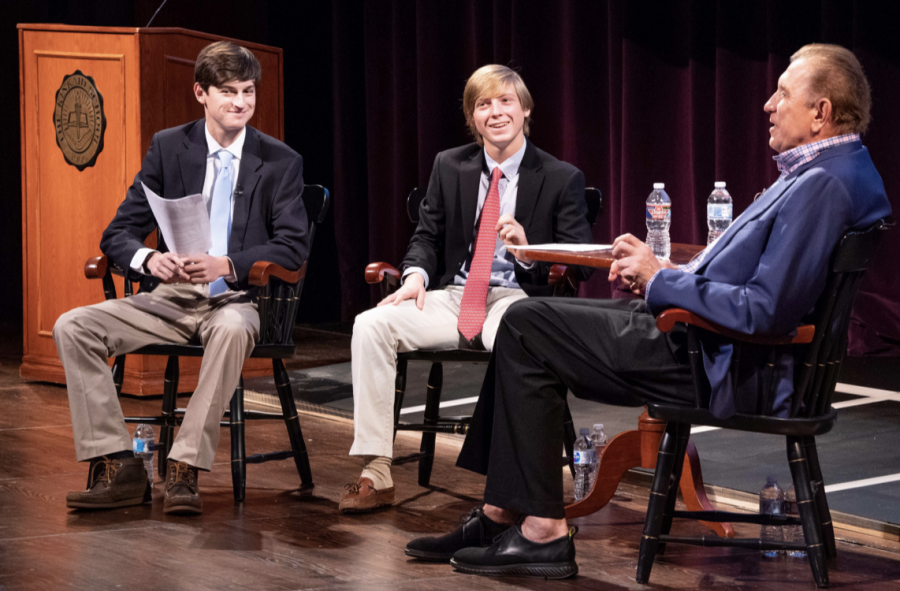 Elliott Crantz and George Kinder speak with Rudy Tomjanovich on Sept. 21. Mr. Tomjanovich's visit to campus was an instance where professional dress was required.

Junior Jaisal Kalapatapu has a proposal.

“Every professional dress day should be offset by a Free Dress Day,” he said.

He has brought this proposal to the attention of the Governing Council through the Falcon Forum, an anonymous discussion forum where students can voice any concerns they may have, ranging from minor issues such as complaints about library noise to bigger proposals like that of Kalapatapu.

The proposal has yet to take off, but Kalapatapu seems hopeful about its success.

“I think it is realistic,” he said. “It isn’t logistically difficult to do.”

Free dress days are not as common during the second semester. Football games in the fall give more opportunities for spirit days, which students often take as “free dress days.” Kalapatapu’s plan would give students more chances to express themselves and wear what they desire during the spring.

He believes this would be especially beneficial for the second semester due to the high stress during this time of year.

“Because people are so stressed out, especially in the spring semester, I think that it would be a really good idea to implement this,” he said.

Although the proposal seems trivial to students’ overall well being, Kalapatapu argued that free dress is vital to student morale.

“When we are allowed to wear what we want to wear and express ourselves, everyone generally has a better day,” he said.

The proposal was brought to the Governing Council. Governing council president Henry Segal explained that “while the lower and middle schoolers had their weekly dress uniform for every assembly, it seemed like we had a free dress day every week in the fall, with only a handful of professional dress days.”

Segal revealed that the idea of balance between professional dress days and free dress days came up a few times prior to Kalapatapu’s proposal.

“It did come up a few times this year from the Falcon Forum, however, the conversation generally didn’t go super far,” he said.

Although as students head into AP exams and finals season, the idea of more free dress days sounds particularly appealing, the school year is coming to a close and implementing something like this could be difficult for the Governing Council to achieve with such little time.

Kalapatapu said he understands this.

“The year is almost over, and I am not sure how many professional dress days we have left,” he said.

But still, he remains hopeful.

“I just hope this policy is implemented before I leave Kinkaid,” he said.