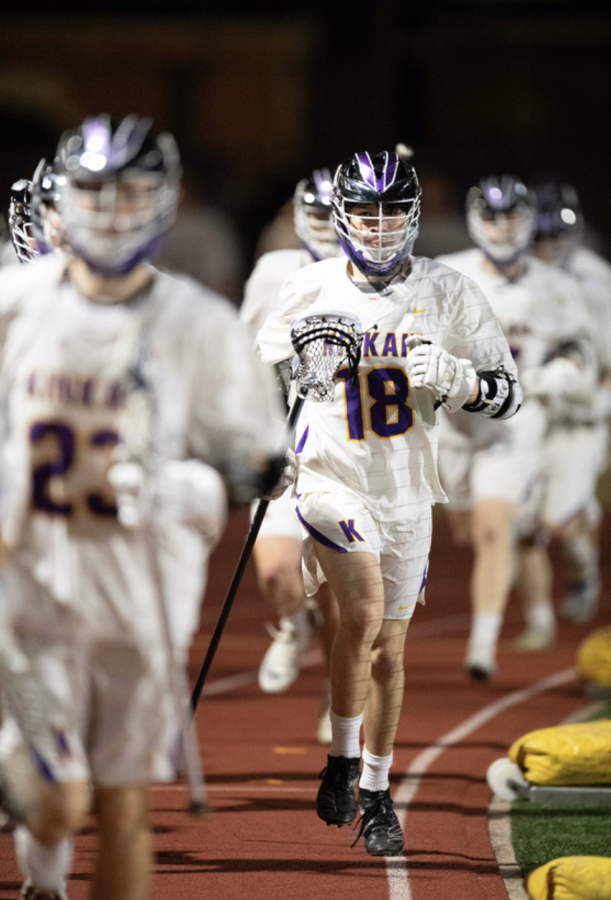 Players run during warmups (photo from 2021).

The Kinkaid boys’ lacrosse team pummeled the Kingswood Mustangs in an easy victory with a score of 14-1 on March 22.

On the offensive end, juniors Watt Muir and Jared Laskin and sophomore Walter Osowski used their stick skills and shot selection to keep the Kingwood defense on its toes.

For the Falcon defense, players such as senior Walker Ball and sophomore Alec Easterby, kept the Mustangs from getting good shots. They forced Kingswood players to make mistakes and turn the ball over.

Controlling the game with their skills and hustle, midfielders, seniors Jackson Doran and Tanner McNamara, overpowered the Mustangs on faceoffs, controlling the ball carefully. In lacrosse, midfielders play on both the offensive and defensive ends, so many players contributed to the win. Junior George Kinder dominated the faceoffs, securing the ball several times for the Falcons.

Sophomore Colton Silverstein, goalie, only let one shot go in the net. Silverstein also made the play of the game, when he ran down the field after a save, weaving through Kingswood players and scoring a goal.

“We demolished them,” said junior Gabriel Meyers. “It was a lot of fun.”

The men’s lacrosse team has had a successful season so far, beating both Strake Jesuit and Katy High School in thrilling games that went into overtime.

Over spring break, the team traveled to San Diego to participate in a tournament. They traveled to the West Coast to compete with teams in California, while still having a great time over dinners and visiting the San Diego zoo.

Although the team did not win its games, players used the trip as a learning experience and became a united force in the Southwest Preparatory Conference lacrosse competition.