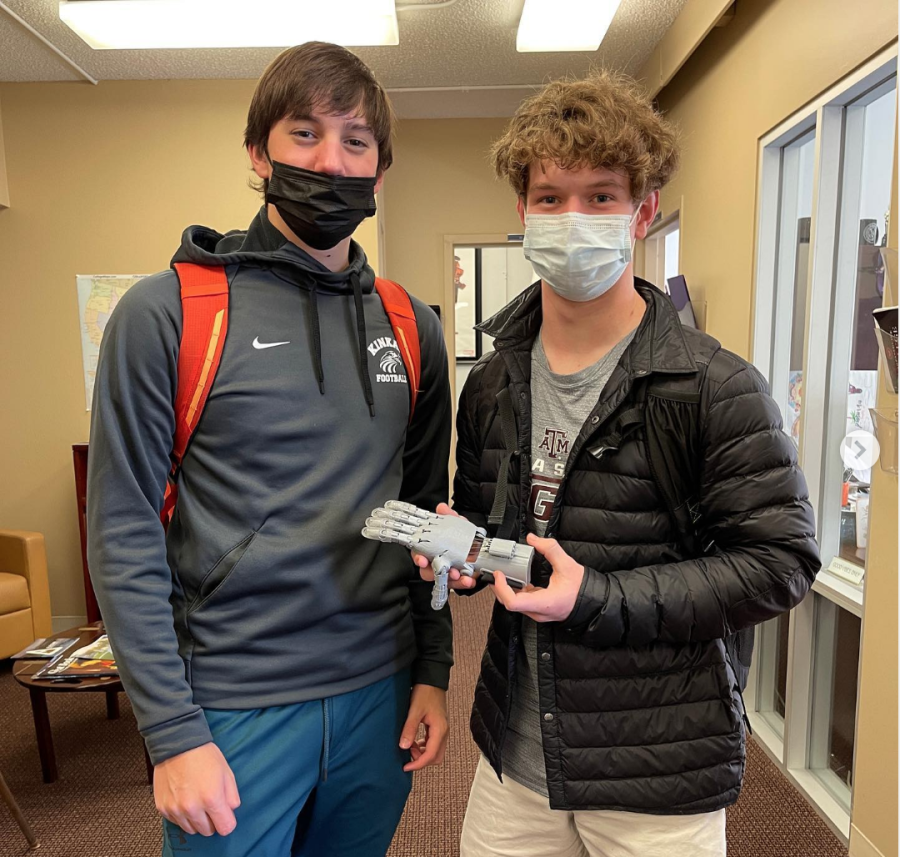 Holthouse and Butler pose with their creation.

Many students spend their interim term learning gardening, 3-D printing, or about public art. However, sophomores Hudson Holthouse and Blake Butler spent their time on something else.

Over interim term, the two spent their time engineering a prosthetic hand.

“We ​​wanted to work on prosthetics to give back to the community and those less fortunate,” Butler said. “Those with injured limbs suffer a huge disadvantage in life.”

After finalizing their project, the two needed to determine which body part to design.

“We didn’t want to have our starting goals too high, nor too low, so a hand was a good start,” Butler said.

Before any actual building could be done, the pair needed to research. They used an organization called e-NABLE to get their device approved for public use and obtain printing plans for the hand. They narrowed down the list to two hand plans on which they conducted in-depth research and ultimately printed using one of Kinkaid’s 3-D printers.

Every project has flaws and roadblocks, and this project was no different.

“We encountered a lot of problems along the way,” Butler said. “Excess print scaffolding and incorrect definition were two of the most major problems with the printing.”

Also, the duo was forced to scrap one of the printing plans and solely work on the other.

Once the prosthetic arm was correctly printed and put together, it was approved by e-NABLE and the team was still waiting to see if anyone in the e-NABLE community would be in need of it.

Butler said he would recommend doing an independent study to students during Interim Term next year.

“If I were to go back, I would do the same thing again,” Butler said. “I found it more enjoyable and fulfilling than my normal classes. My only regret is that we didn’t find someone to actually make the hand for.”